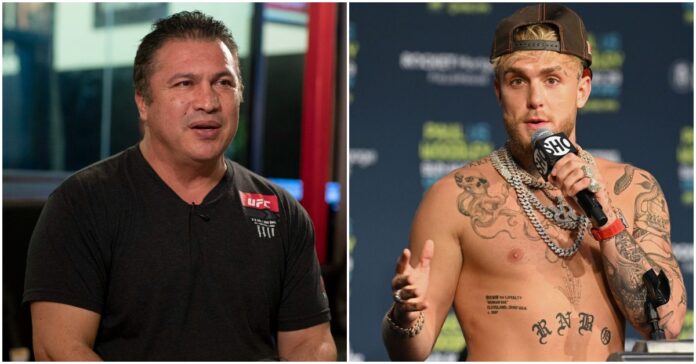 American Kickboxing Academy Head Coach, Javier Mendez, has questioned Jake Paul who has been relentlessly campaigning for improved pay for UFC fighters as of late.

Mendez believes that the MMA leader, outside of pay-per-view, pays much better than boxing. The renowned MMA trainer says the UFC has a “great” pay structure that allows undercard fighters to make good money in the sport.

“Who is Jake Paul talking about when he says the UFC guys need to get paid better? The lower guys on the shows get better paid than just about anybody else out there,” Mendez said during an interview with Betway. “It’s just the pay-per-view numbers that need to be worked on. The UFC pays great in comparison to other organisations – apart from the pay-per-view -compare the UFC to boxing and see who pays more. The UFC does. The UFC has guys on the undercard that get paid more than boxers do in the main event. Just look at the numbers with the exception of pay-per-view – those numbers are different. But outside of that the UFC pays great.”

On the topic of ‘The Problem Child’, Mendez expressed his belief that the former Disney actor turned 5-0 professional boxer would handle Conor McGregor in the squared circle.

“I would favour Jake Paul at 175 over Conor in a boxing ring because he’s too big,” Mendez said. “But you can’t count Conor out, Conor’s a good boxer, so you can’t discount his boxing ability. But the size is a little much, Jake Paul hits extremely hard as you can tell by what he’s done. If you haven’t woken up to Jake Paul’s ability they better because he’s only improving.

“So I think the size is a big difference and the power would be too much for Conor,” Mendez continued. “Sometimes you can be bigger and not punch harder, but in this case Jake Paul is bigger than Conor and punches harder and he’s good, so all three variables are with Jake. He’s just a bigger man fighting a smaller man. Jake Paul also isn’t necessarily a novice anymore. He’s experienced in dealing with high pressure fights, and he’s proven he’s able to handle that pressure. So it’s a big man versus a little man and the big man just so happens to have more firepower.”

Do you agree with Javier Mendez on UFC fighter pay?