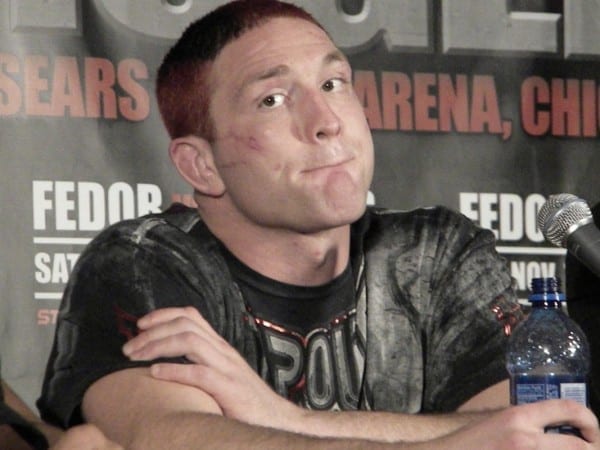 Jason Miller’s return to MMA might have to wait after his latest run-in with the law.

The troubled UFC veteran was arrested for allegedly vandalizing a tattoo shop this January. He was taken to Orange County Men’s Central jail where he is being held on a $1,000,000 bond according to a report from TMZ Sports.

‘Mayhem’ was scheduled to take on fellow UFC castoff Luke Barnatt in the headliner of May 21’s Venator 21 from Italy, his first fight since a 2012 defeat to middleweight vet C.B. Dolloway.

Miller was once a prominent figure in the MMA world, hosting MTV’s “Bully Beatdown” prior to his stint as a coach on The Ultimate Fighter (TUF) 14. There, he failed to deliver on his massive trash talk opposite Michael Bisping, absorbing an embarassing TKO loss at the Finale.

He was cut after the subsequent loss to Dollaway and has been on an unfortunate downward spiral of drug and alcohol abuse coupled with numerous arrests for charges such as DUI, assaulting a police officer, and a highly publicized standoff with a SWAT team at his California home. The high number of his arrests coupled with the fact that he already out on bail for a prior felony charge.

Miller was reportedly arrested on Tuesday and appeared in court today.

Venator FC has not pulled Mayhem from the bout despite the allegations, but with only slightly more than two months remaining until the card, they may have no choice.