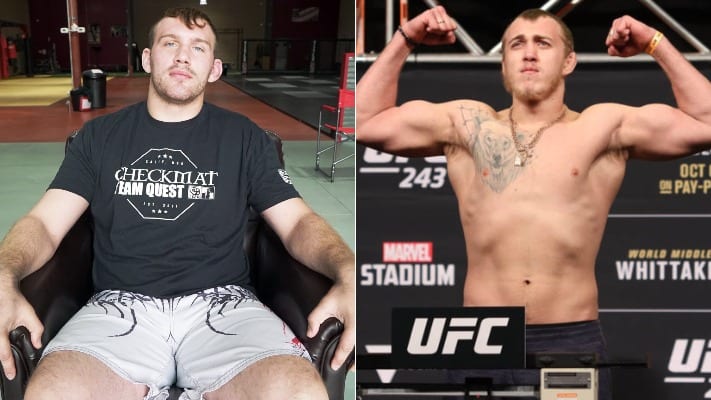 Following his win on DWCS, Jared Vanderaa looks set to take the UFC Heavyweight division by storm. ‘The Mountain’ clinically defeated Harry Hunsucker on the contender series, via first-round TKO. This emphatic victory ensured an instant UFC contract for the Team Quest fighter. Vanderaa recently sat down with LowKick MMA to discuss his upcoming UFC debut.

Vanderaa’s debut will be against Sergey Spivak, an 11-2 fighter, who holds a 2-2 record within the UFC. The fight came about as a result of Vanderaa instantly calling ‘The Polar Bear’ out, following his win over Hunsucker. However, the two heavyweights have a history, Vanderaa explained.

“He was someone I was supposed to fight in the regional scene, and I wanted to fight him. Considering how quickly he responded (this time), and his team, they weren’t scared to fight me back then. They were just trying to get him, to where he is now. And I can respect that. Them trying to protect their guy. They looked at me like I was a harder fight for him than some other dude.”

“I think they pulled him (over), and were like hey, we feel like you beat him. But we don’t want to risk it. Let’s get you someone you can beat up. And I think that’s what they were trying to do with his record.”

When asked about any defining parts of Spivak’s game that stand out to Vanderaa, he initially eluded to Spivac’s sambo background. However, he soon went on to focus on the following:

“He’s built weird I think. I think he has really really long legs. That’s just an observation and I don’t know if that a good thing or a bad thing either. If used properly it’s one of those things that could be a great tool, if it’s not used to full advantage, it could be a detriment.”

This unique physical composition of Spivak also played into Vanderaa’s prediction for how the fight will play out. “A rolling heel hook” the Mountain instantly said, “I’m gonna roll into a heel hook. Those long legs are wide enough where I can glide through, rolling heel hook, bang night over in 10 seconds. I might keep it going till the second round just to give people entertainment, but rolling heel hook. I’m gonna Ryan Hall him. Call it a day.” Vanderaa also added. “That’s how I plan on beating Francis (Ngannou) too.”

How do you see Jared Vanderaa faring in his UFC debut?