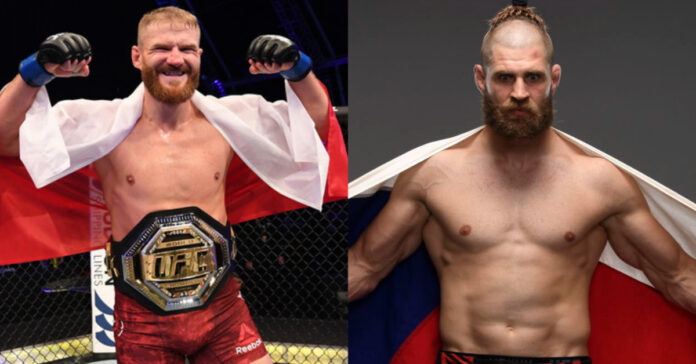 Former light-heavyweight champion, Jan Blachowicz is not pleased with Jiri Prochazka for now pursuing a rematch with Glover Teixeira.

When Jiri Prochazka and Glover Texeira met at UFC 275, they produced one of the best title fights of all time. A back-and-forth war that saw both men hurt and having to dig deep, resulted in a new champion raising the 205lb title.

Texeira would stun and hurt Prochazka in the fifth round, ultimately making a fatal mistake by jumping on Prochazka’s neck for a guillotine. Prochazka would find his way to Texiera’s back after this mistake, where he would sink in a rear-naked choke to finish the Brazilian with just 30 seconds left.

Following the bout, Prochazka would have an interaction with Jan Blachowicz who was sitting cage side, perfectly setting the stage for one of the biggest fights in European MMA history.

Blachowicz is currently coming off a win over Aleksandr Rakic after Teixeira would defeat him for his light-heavyweight back at UFC 267. His win over No.3 ranked Rakic, despite it coming in hardly the most ideal of circumstances, would ultimately get Blachowicz back in the win column, something that he desperately needed if he were to gain another title shot.

After some exchanges on social media and interviews, it really seemed that fans were going to be treated to a showdown between Prochazka and Blachowicz. Both men would hail the abilities of one another, with Prochazka ultimately calling for the fight to take place in Europe.

This was until Teixeira began campaigning harder for an immediate rematch, which Prochazka appeared to agree to.

This of course did not sit well with Blachowicz who ultimately feels he is deserving of a rematch as well as being called out by the champion. He would tweet:

What do you think? Does Jan Blachowicz deserve the next title shot?