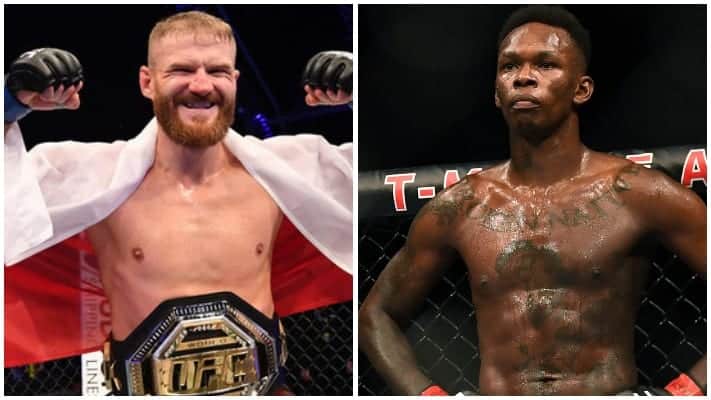 Light-heavyweight champion Jan Blachowicz has predicted he will knock out Israel Adesanya with a head kick inside two rounds at UFC 259.

Blachowicz won the 205lb strap by taking out Dominick Reyes in two rounds at UFC 253 in September 2020.

On the same card, Adesanya made the second defence of his middleweight belt by quickly stopping Paulo Costa.

‘Stylebender’ will attempt to become a two-weight UFC champion by dethroning Blachowicz on March 6.

“He’s just another opponent and I just have to beat him,” Blachowicz added. “And this is one thing I have in my head right now, nothing else.”

Blachowicz notes Adesanya’s strengths but insists he is prepared to deal with them and ultimately give the New Zealander the first defeat of his MMA career.

“We see his holes,” Blachowicz said. “Where we can put our fists on his face. We know that he is a really good stand up fighter, really good striking, really good footwork. And he has his own style but we are ready for that.

“Maybe [past opponents] were afraid of him. I am not. Maybe they don’t fight the way how to beat him. I’m going to be the first one. And after our fight, he will be 20-1.”

The 37-year-old made a very specific prediction about how he sees the fight going.

“I see KO in the second round,” Blachowicz said. “Left high kick on his head. This is what I see.

Do you think Jan Blachowicz will beat Israel Adesanya at UFC 259?