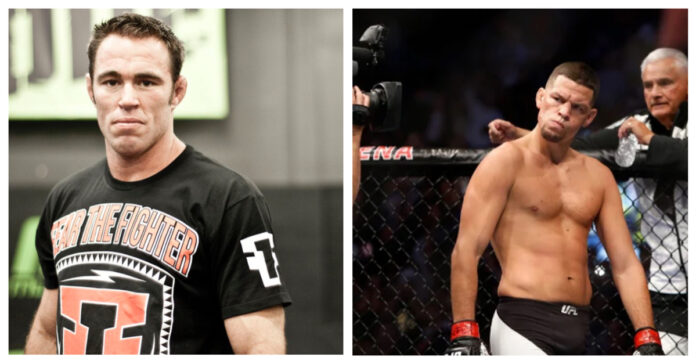 Former UFC fighter Jake Shields says that the UFC is holding his longtime teammate and won’t let him fight out his UFC contract.

The Diaz situation has been a weird one to say the least. Every week he is calling for a someone in the top 10 to fight hm. He religiously calls out the UFC and Dana White, and even went as far as urinating on the UFC performance institute, in an attempt to make the organization mad.

It’s almost been a year since Diaz has step foot inside the octagon. His last fight was against Leon Edwards in a rather one sided bout, until the last minute of the final round. He has not had a fight since, despite never being injured in the time since. He has repeatedly said that he is looking for a fight, so he can finish his current contract with the UFC.

Shields has said that the situation is just a weird one, as Diaz is ready for a fight and wants to stay active, but the UFC will not give him anything substantial.

“The whole situation is just getting weird and frustrating,” Shields said of Diaz’s status. “I don’t think anything’s really changed. It just seems to be the same pattern of Nate wanting to fight. [But the UFC] They’re not offering anything.” Shields said in an interview with Helen Yee (Transcribed by MiddleEasy)

‘He always said he wants to fight top 10 because they offered him Khamzat,” he explained. “He wasn’t sure but then he said he’d fight him after the Burns fight, once, you know, he finally beat a ranked opponent and then they went off from the fight after he asked for it. So, seems like it’s been kind of weird, I think. It’s the last fight of his contract, the UFC just don’t want to let him out of his contract.”

The UFC was rumored to have offered a fight with Chimaev to Diaz before the Gilbert Burns fight, but he declined due to Chimaev not being in the top 10.

Do you think Nate Diaz will get a fight soon? Who would you like to see him fight?