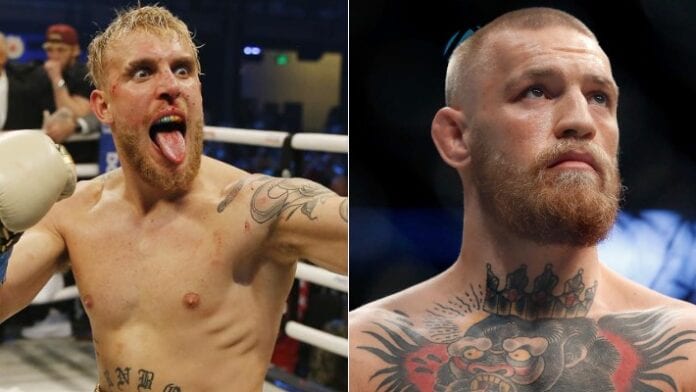 Jake Paul says he has billionaire investors ready to back him and make the Conor McGregor fight a reality.

The YouTube star has been calling out McGregor since his second-round knockout of former NBA star Nate Robinson on November 28. It was the second win of his career, after stopping fellow internet celebrity AnEsonGib in the first round of his pro debut. Immediately after beating Robinson, Paul was quick to challenge a number of MMA stars to step in the boxing ring with him, including Jorge Masvidal, Dillon Danis, and McGregor. When asked about his offer by TMZ, Paul wanted to make sure everyone knows his offer is serious.

Paul then proceeded to pull out his phone and showed off an email he claims to be from New York Signature Bank.

The e-mail states the Paul’s investor “has liquid balances in excess of $50MM.” The name of the investor has been blacked out.

When asked what his team had heard from McGregor’s camp, Paul said it’s been radio silence from the former two-division UFC champ, and he thinks he knows why.

“When we sent them the proof of funds, they put their tail between their ass and they’re like, ‘Oh s—, this little crazy kid ain’t playing’… He’s scared, bro. Scared to lose. And I think Dana White’s being like, ‘Well, what happens if Jake Paul lands that lucky punch, knocks Conor McGregor out, and now the whole UFC looks like a clown?”

Paul was also asked about the comments he made towards McGregor’s fiancé. He refused to apologize, and called out the hypocrisy of those who have been criticizing his words.

“(McGregor) spoke on Khabib (Nurmagomedov)’s wife. He said Khabib’s wife looks like a towel,” Paul answered. “Now he’s going to have a taste of his own medicine, and now all of the sudden people are butt-hurt. I’m going too far? F— off. This is the fight game. Why are people being b—— now all of the sudden? Same with Dillon Danis. They’vs said f—– up s— about religion, Khabib’s religion… F— those guys!”

We’ll have to wait and see if Paul really does have the financial support he claims to have and what McGregor’s response will be. Until then, both men are sure to be busy. McGregor has his rematch against Dustin Poirier coming up on January 23, and Paul is sure to be helping his brother Logan prepare for his boxing match against Floyd Mayweather. If the McGregor fight fails to come together, there’s another former UFC champion who would be more than happy to meet Paul in the boxing ring.

Do you think we will ever see Jake Paul vs Conor McGregor in a boxing match?