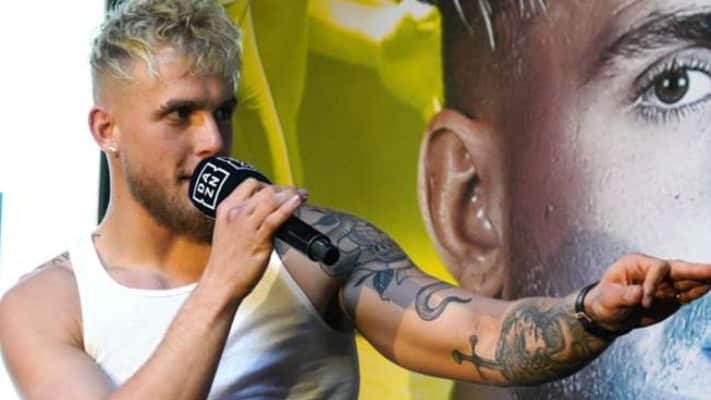 When Firas Zahabi‘s PED accusations against Jake Paul were brought up in an interview with MMA Junkie this week, Paul explained that he hasn’t been tested for any substances ahead of the bout with Tyron Woodley this Sunday night.

Firas Zahabi claimed on his YouTube channel that the up-and-coming boxer was cheating going into the bout, where Woodley was not.

However, when this accusation was brought up to the Youtuber, Paul responded: “My manager sent me that the morning it came out like, ‘Hey, by the way, Georges St-Pierre’s coach said you’re on PEDs,’” Paul said. “So I swiped up my phone – this is a true story on my mom’s life, she’s looking me in my eyes (right now) – I swipe up my phone, click Safari and type in, ‘What’s PEDs?’ Then I see it says performance-enhancing drugs. I texted my manager back, ‘Good thing I had to Google what PEDs are.’ But I look at it as a compliment. People are trying to do anything they can to discredit me and take away from this journey. They’re already making excuses for him when he loses.”

Paul explained that the Ohio State Athletic Commission hasn’t tested him once during the lead-up to his 190 pound bout this weekend. Paul did explain however, that if need be he’ll gladly take a test when asked to do so.

“Not yet. I think that happens the day of the fight or the day before the fight. But test me whenever.”

As for Zahabi, Paul thinks the renowned MMA coach is simply clout chasing and will be happy to hear him talking about him.

“Of course, he’s doing it to get clout. Look at it, four weeks later, it’s still getting brought up in the interview, his name gets mentioned, and then he gets some clout. I’m sure he’s a happy little wanker jerking off to these videos somewhere, getting all excited for the clout he’s getting,” Paul said.

This now begs an important question: has Jake Paul been tested for illegal substances?

“Not yet. I think it happens, like, the day of the fight or the day before the fight. But, test me whenever.” (Transcribed by Bloody Elbow)

Do you think Jake Paul is on PEDs?