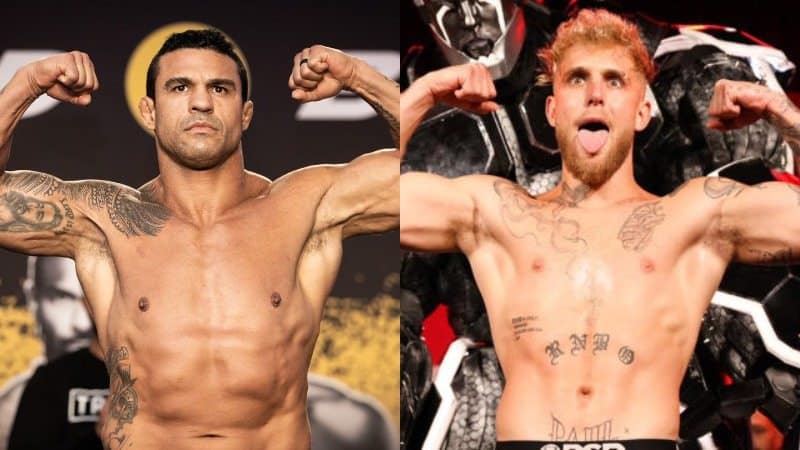 A massive offer is on the table for Jake Paul to fight Vitor Belfort.

Belfort was in action on Sept. 11. He took on 58-year-old Evander Holyfield in the main event of a Triller card. This was a boxing match.

It was clear that Holyfield was having trouble dealing with Belfort’s speed and aggression. Belfort dropped Holyfield in the first round. The “Real Deal” beat the count and while he wasn’t really hurt badly in the fight, the referee knew things were going downhill fast and stopped the fight.

After the bout, Belfort laid down a stern challenge to Jake Paul.

“We got $25 million, the winner takes all. Let’s go. Hey, Jake Paul, stop running from me man. I’m gonna teach you a lesson. You can be my kid. You’re gonna meet daddy over here at Triller. Stop running, you a little b*tch.”

Triller’s Ryan Kavanaugh then clarified that the offer to Paul is actually for $30 million.

“Triller’s Ryan Kavanaugh is proposing a $30 million, winner take all fight between Jake Paul and Vitor Belfort on Thanksgiving night.”

Paul is a popular YouTuber who has dabbled into the world of combat sports. In his last two boxing matches, Paul has beaten former MMA world champions. Those victories came against Ben Askren and Tyron Woodley.

Paul once worked with Triller for his bouts against former NBA star Nate Robinson and Askren. For his bout with Woodley, Paul signed with Showtime Sports. It’s clear that Triller wants back in the Jake Paul sweepstakes.

As of late, Paul has been turning his attention to Tommy Fury. The two have been trading barbs on social media. Fury competed on the same card Paul headlined against Woodley. Backstage after the event, Paul and Fury had to be separated by security after a run-in.

Do you think we’ll ever get to see Jake Paul vs. Vitor Belfort?