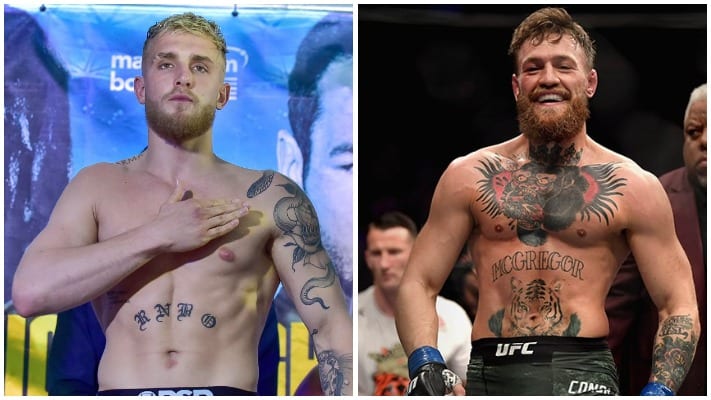 Khabib Nurmagomedov’s long-time coach, Javier Mendez appears to be backing Jake Paul to beat Conor McGregor if they ever face-off inside the squared circle.

The YouTuber has been carving out a lucrative boxing career for himself as of late. Paul is currently 4-0 as a professional and holds two big wins over former MMA champions Ben Askren and Tyron Woodley.

Paul has been relentlessly calling out McGregor for more than a year now. The Irishman has distanced himself from the trash talk without totally ruling out the possibility of fighting the internet celebrity down the line.

Some believe a fight with McGregor would be a step too far for the combat sports newcomer. Mendez disagrees with those people and says Paul would enter a ‘Notorious’ fight with several big advantages.

“Jake has got so many advantages on Conor,” Mendez told Betway. “Size being one of the big major ones, and the fact that he’s been boxing for three plus years with really good boxing professionals that know what they’re doing. So no, he shouldn’t have to fear Conor whatsoever.

“Instead, he has to fear people like Canelo,” Mendez added. “He would just smash him in one round, it would be embarrassing. He hasn’t got a chance against those kinds of guys, he really should stay away from him – but against Conor, absolutely he has a chance. Looking at the two, Jake’s got big advantages in size and power. Yes, he doesn’t have fight experience, but he’s been strictly just boxing for a long time now. Conor’s not been strictly boxing.”

The American Kickboxing Academy (AKA) Head Coach was full of praise for the divisive Paul Brothers who are currently taking the boxing world by storm.

“The Paul brothers are extremely likeable entertainers or extremely hateable entertainers, depending on your viewpoint,” Mendez said. They cross both fields. People love them, people hate them but people want to watch them, so I applaud them for what they’re doing. I respect their abilities but they’re not true boxers. They’re legit boxers but they’re not high level. They’re not high level at all, they’re beginners. For beginners to do what they do, that’s amazing and I applaud them for that because it takes special people to get that kind of attention.

“Whether it’s great for the sport, I‘d have to say majority yes because look at Jake Paul’s PPV numbers,” Mendez concluded. “How can a guy box another guy that’s never boxed and get that kind of attention? I’d be fooling myself to say nobody’s interested because of the really good numbers. One of the highest numbers of all time on PPV so, you know when you get over a million, that’s pretty high so I say kudos to them. They’re doing a great job.”

Do you agree with Javier Mendez? Does Jake Paul have a genuine shot at beating Conor McGregor in a boxing match?