LowKickMMA.com
Home Global MMA Jake Paul claims Dana White is ‘like an ex’ after the UFC... 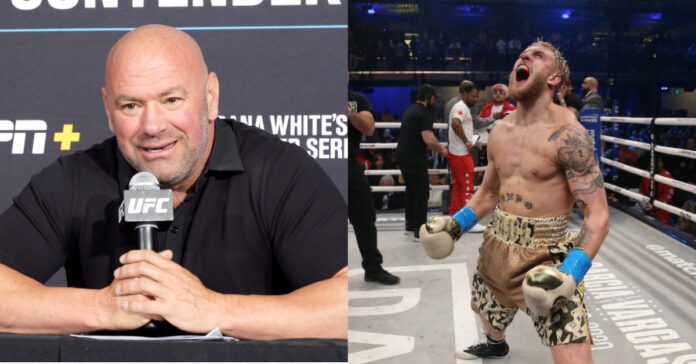 YouTube star turned boxer Jake Paul has referred to Dana White as acting ‘like an ex’ following the quick dismissal of any questions surrounding Paul during a UFC press conference.

During a UFC media day, Dana White was quick to shut down a reporter who wanted to ask him a question relating to Jake Paul. The pair have often made comments relating to each other, with White previously taking shots at Paul for being unable to provide pay-per-view level entertainment which he believed ultimately led to the cancellation of Paul’s most recent scheduled boxing bout.

Jake Paul himself has been extremely vocal to the media regarding issues such as fighter pay and showing concern for the welfare of the athletes within the sport claiming that Dana White simply doesn’t care about the people inside his promotion.

Jake Paul questions Dana White’s response to a statement relating to the boxer: “Why so angry?”

During the clip, you can see White shut down the reporter before going on to ask all members of the media to stop asking him questions surrounding ‘The Problem Child’ as he simply “doesn’t want to talk about him anymore.”

Unfortunately for White the same cannot be said for Jake Paul who claimed the UFC boss was disrespectful to members of the media and welcomed any questions they may have for him.

“Sounds like an ex who still isn’t able to get over you. Why so angry? Turning red.

To all MMA media…you can ask me anything you want. That’s your job and I respect it.”

The UFC boss will have bigger things to be concerned about currently as the promotion hosts its first event in France this weekend headlined by title contenders Ciryl Gane and Tai Tuivasa. Although Paul was focused on the comments White made, his attention may soon turn to one of the UFC’s former champions as it is rumored for his next boxing match he will be taking on former middleweight champion Anderson Silva.

Despite White’s disinterest in Jake Paul and his involvement in combat sports, it seems unlikely that this will be the last time the pair take verbal shots at each other.

What did you make of Dana White’s comments regarding Jake Paul?