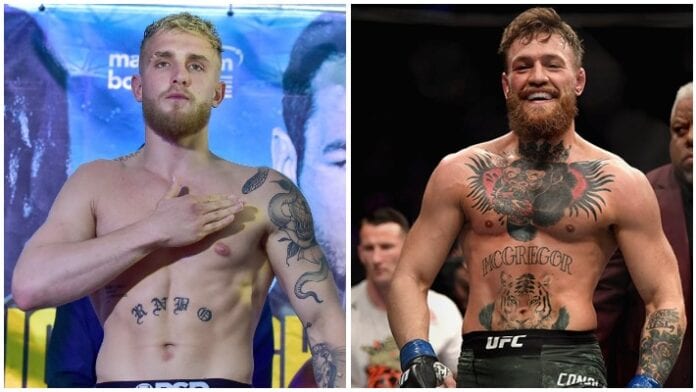 The 23-year-old called out McGregor in the aftermath of his second boxing win on the undercard of Mike Tyson vs. Roy Jones Jr. which took place this past weekend. Paul scored a brutal, second-round knockout victory over former NBA player Nate Robinson after previously taking out fellow YouTuber AnEsonGib inside one round earlier this year.

“I’ve been training my ass off for the past year. I’m taking this seriously,” Paul said in his post-fight interview. “There’s a long list of opponents that I want — Conor McGregor, Dillon Danis. I’m going to knock them both out.

Speaking to TMZ Sports Paul indicated that talks had begun between his team and McGregor’s about the possible match-up.

“My team is talking to his manager but that’s all I’ll say,” Paul said with a smirk. “No other fighter with this big of a platform is calling out McGregor. My dogs have more followers than the guy he’s fighting in January,” he added.

McGregor is currently booked to face off against Dustin Poirier in an eagerly anticipated rematch at UFC 257. The Irishman has boxed just once professionally – losing via tenth round TKO against Floyd Mayweather in 2017.

As of late the former dual weight UFC champion has been talking up his potential return to boxing. A fight with Filipino boxing legend Manny Pacquiao is in play for 2021. Both McGregor and Pacquaio are under Paradigm Sports Management who insist the crossover fight remains on the table despite ‘Notorious’ signing on for a January 23 UFC fight. Bellator fighter Dillon Danis is also under the same management group, so don’t be surprised if it’s he who faces Paul next.

Do you want to see Jake Paul and Conor McGregor box?