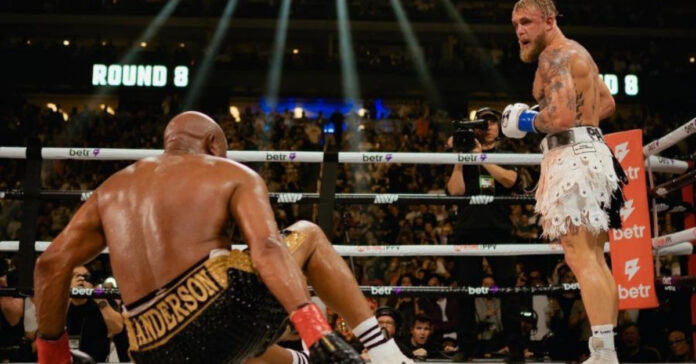 It’s almost par for the course following the culmination of a fight involving polarizing boxing upstart, Jake Paul that calls and shouts of a rigged contest or fixed fight arise. And following the Ohio native’s unanimous decision win over ex-UFC middleweight champion, Anderson Silva last weekend, many social media users have insisted a phantom punch from Paul resulted in the eighth round knockdown.

Improving to 6-0 as a professional after a lengthy layoff from his December rematch knockout win over former undisputed UFC welterweight titleholder, Tyron Woodley, YouTube star, Jake Paul managed to turn in a unanimous decision win over Brazilian veteran, Silva.

Sharing a tight and close fight over the course of the eight round professional affair, Silva managed to take some rounds from Paul, however, was dropped with a right hand in the pocket in the final round, sealing the latter his sixth professional victory.

However, in footage released and shared on social media of Jake Paul’s knockdown against Silva, the reverse angle has led fans and commenters to speculate the legitimacy of the strike – speculating if the punch even landed.

In the ringside footage released by Showtime – the event’s broadcasters, however, footage clearly shows Paul land a right-hand counter as Silva engages, sending the Curitiba veteran to the canvas.

As mentioned earlier, during Paul’s knockout sequence in his December professional rematch with Woodley, speculation was posed if Paul had given Woodley some sort of notion or nod with his glove that he was about to land a massive overhand shot – almost as if the fight had been choreographed.

Off the back of his career-highlight win over Silva, Paul called for another grudge match against former UFC welterweight contender, Nate Diaz – who briefly attended the event before his team engaged in a backstage scuffle with Paul’s entourage.