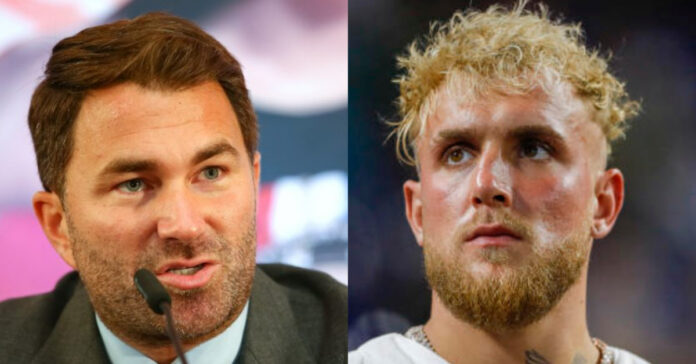 YouTube sensation turned boxer Paul took issue with the judging of Katie Taylor’s historic contest with Amanda Serrano and pointed out boxing judge Glenn Feldman’s controversial scorecard, which favored Taylor by the biggest margin of any judge, as an indication of foul play.

Hearn recently issued a statement threatening Paul with litigation if he did not apologize publicly.

Hearn followed through with his ultimatum and sued Paul in U.S. District Court for the Southern District of New York. His attorney Frank Salzano reported that his clients are seeking more than $100 million in damages. TMZ was the first to report news of the lawsuit.

“Both legally and ethically there is a clear line separating opinion from defamatory lies,” Salzano said via ESPN. “Jake Paul knows that, and he purposely crossed that line when he wrongly accused Matchroom Boxing and Eddie Hearn of fixing fights. Nonetheless he was still given an opportunity to retract his defamatory statements and refused to.”

Salzano argued that Paul’s comments caused financial damage to Hearn and the firm.

“Such accusations are obviously deeply offensive as well as damaging to [Hearn and Matchroom],” wrote Salzano, a partner in the New York law firm Salzano, Lampert & Wilson, LLP. “They are also patently false. [Paul’s] defamatory statements were made with malicious intent and have caused financial and reputational harm to [Hearn and Matchroom], which is precisely what [Paul] intended when he made the outlandish accusations,” Salzano wrote.

In an interview last week with IFL TV, Paul claimed that Feldman was paid off by Hearn to score fights in favor of Matchroom boxers.

“It’s like a repeated crime here,” Paul told IFL TV. “This type of s—, I’m going to call it out here in boxing because it’s bulls—. Clearly, this guy (Feldman) is getting paid money by Matchroom Boxing.”