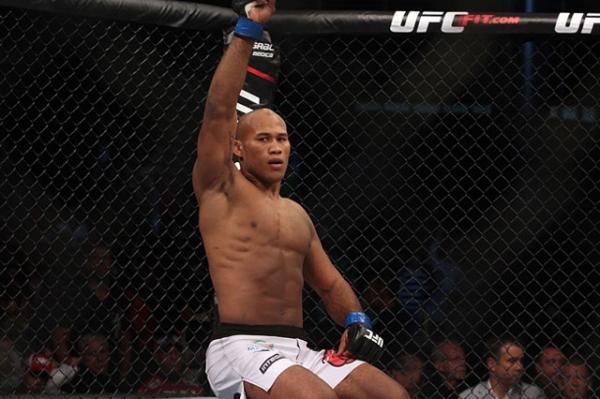 Former Strikeforce middleweight champion and current top UFC contender Ronaldo ‘Jacare’ De Souza is currently unbeaten in eight fights. His current number two spot in the rankings is made up of a five-fight UFC win streak, including finishes over Chris Camozzi x 2, Yushin Okami, Gegard Mousasi and a decision over Francis Carmont. The Brazilian grappling ace has appealed vehemently for a title shot, but it looks as though Luke Rockhold was more in favor at the present time.

”Rocky’ earned his middleweight title fight stripes with a huge submission win over Lyoto Machida, and his semi-beef with current champion Chris Weidman made his case that much more appealing than that of De Souza. So what’s next for the hungry ‘Alligator’ from Brazil? He tells media at the UFC 190 presser, via MMAFighting.com, that he’d rather face another opponent before sitting and waiting for the winner of Weidman vs. Rockhold:

“I’m anxious and always ready to fight,” he said. “Give me a tough opponent and I will beat him up. I won’t wait for anyone. I was not born to wait, I was born to become champion.”

‘The Phenom’ is coming off a title fight loss to ‘The All-American’ at UFC 187, after a long and drawn out feud with the middleweight boss. A fight with Souza would certainly make sense as far as the rankings are concerned, but it’s questionable as to whether Belfort even wants another run at the title at this late stage in his career. Souza continues, once again arguing a case for a title shot before his AKA (American Kickboxing Academy) rival Rockhold:

“Sometimes I wonder why people don’t give us credit. My fight with Rockhold (in Strikeforce) was a five-round war and people started to mock me, they didn’t know how tough Rockhold was. It’s good that they start believing in our work, in the Brazilians. Sometimes a loss happens, even if by the judges’ hands, but we come back stronger. I surprised against Mousasi, and will do the same to Rockhold, no doubt.”

“I don’t think it’s fair,” he said. “I thought that Rockhold should get past by me to fight for the title, or wait before I get my shot at the title. That’s the reality, there’s no other way, but unfortunately happened this way and we have to do one more fight.

“I don’t think (Rockhold) fought tougher fighters, I don’t know why people say that,” he continued. “He fought Tim Boetsch, who has more holes in his game than a Swiss cheese. He fought Costa Phillipou, who can’t stop a takedown – but his merits for beating him standing. I fought Okami, who is tougher than them. I fought Mousasi, who is as tough as Lyoto – and he did a great job. And he fought Belfort, and I don’t even need to comment on that.”

Perhaps the fact that Souza already has a loss to Rockhold is the reason that his old nemesis is next in line, or maybe the promotion couldn’t consider a second win over Chris Camozzi as a legitimate case for a crack at the belt. Either way, it looks like we’ll see Jacare enter the octagon again for a non-title fight. The question is, if Belfort is not available, then who else is? With Anderson Silva out, Machida and Romero set to tangle, and Rockhold vs. Weidman official, there really isn’t anyone else out there.

Unless Souza is willing to risk facing an opponent out of the top seven ranked fighters, which would be a dangerous gamble, he may well be waiting for his title shot.

The ball is in your court Vitor…..