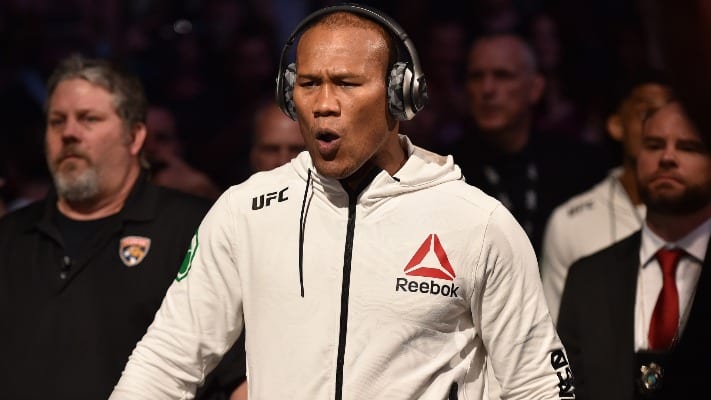 Its been an up-and-down past few years for longtime UFC veteran Ronaldo “Jacare” Souza.

Souza hasn’t put together a win streak since early 2017 and has split his past six fights. In his last outing, Souza was defeated by rising 185-pound star Jack Hermansson via unanimous decision back in April. After pondering retirement, Souza will jump up to 205 pounds to face Jan Blachowicz at UFC Sao Paulo.

Speaking to MMA Fighting, Souza opened up on how mental health issues led to him nearly retiring.

“Man, I was thinking about stopping (fighting). I had a psychological problem, I was burned out. I would drive to the gym and cry in the car and say, ‘Man, what am I doing going to the gym?’ My wife found a psychologist for me, I’m working on that once a week, and that has helped me a lot.

“I’m super happy with the opportunity of going back to fighting, I’m happy and excited and training like never before. There are a lot of good things happening in my life. Three months ago, I was crying on my way to the gym, tears would come out of my eyes and I didn’t know why. ‘What am I doing, man? I’ll stop fighting, I don’t want this for my life.’ And all of a sudden things were new again.

“I have the opportunity to headline a card, I’m excited again, I’m training, you know? ‘Dede’ Pederneiras has been phenomenal, he’s helped me a lot as well. I have no words for him. I already admired him before and now that we’re working together I admire him even more.”

Blachowicz comes off of a second-round knockout win over former 185-pound champion Luke Rockhold. There was some talk that he could be next in line for Jon Jones, but now, he’ll welcome Souza, one of the most dangerous grapplers in MMA history, to the light heavyweight division.

What do you think about Souza returning to the Octagon at light heavyweight?