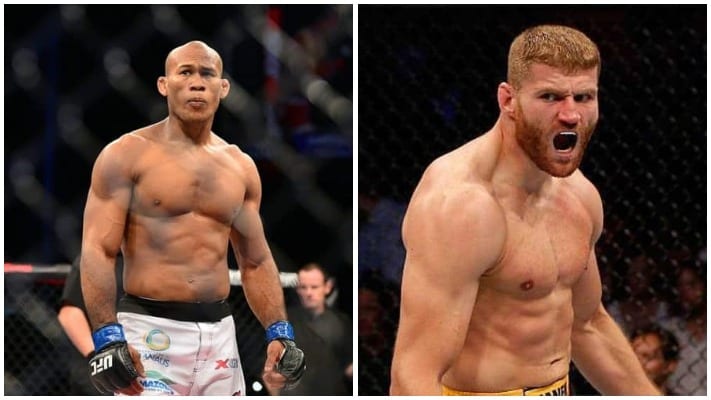 The UFC’s return to Sao Paulo, Brazil will feature the light heavyweight debut of Ronaldo “Jacare” Souza as he takes on Jan Blachowicz in the headliner.

The news was announced by UFC president Dana White (via ESPN). The Fight Night event takes place November 16 at the Ginasio do Ibirapuera arena.

Souza is coming off a decision defeat to Jack Hermansson earlier this year. There was talk of him retiring afterwards, especially as he missed out on another title shot. However, those rumors were quickly quashed by his team. Instead, he will now make the move up to 205 pounds in search of UFC gold. The Brazilian jiu-jitsu black belt is 2-3 in his last five fights at middleweight.

As for Blachowicz, he has won five of his last six outings and most recently knocked out former middleweight champion Luke Rockhold. He was expected to challenge Jon Jones for the light heavyweight title next but instead will welcome another former 185er in Souza to the division.

There is no update on what this means for Jones and his next fight but it certainly makes things interesting.

What do you think of Souza moving up? Do you think he’ll fare well against Blachowicz?