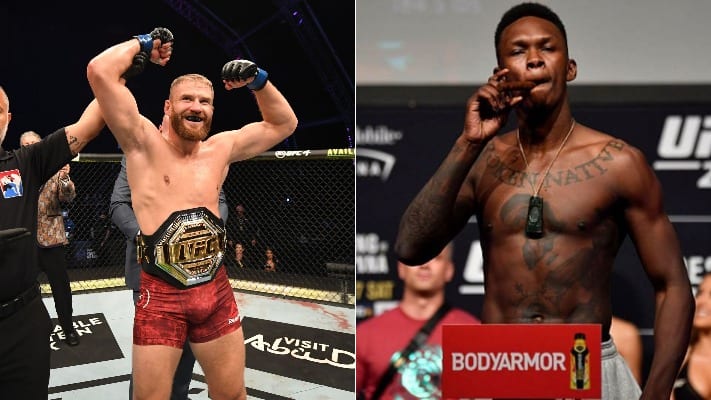 Israel Adesanya is going into his 21st professional MMA fight with the confidence that only a man who has won his previous 20 bouts can exude.

‘The Last Stylebender’ is set to move up to Light Heavyweight, in an attempt to become the 5th ever dual weight champion in UFC history. His opponent will be the Polish powerhouse, Jan Blachowicz, who is currently riding an impressive 4 fight win streak. Having most recently dispatched Dominick Reyes to claim the Light Heavyweight title, he is a threat for any opponent.

However, Adesanya is not fazed by his opposing adversary. Speaking to TheMacLife, the 185lb champ had the following prediction:

Jan of course has other plan. The Polish champion see’s a highlight finish materializing, to end Adesanya’s undefeated record. Speaking on the Just Scrap Radio, Blachowicz had the following to say:

“We do a lot of wrestling so maybe I will take him down. But, I like fighting standup, every fight starts standing. If I have a chance to take him down I will do it. I watched the fight in kickboxing where he got knocked out many times. I will use my striking to knock him out. It’s part of my game plan but you will have to wait until to see the fight. He will feel the Legendary Polish Power, I promise you (via BJPenn).

How do you see Israel Adesanya vs Jan Blachowicz going? Let us know in the comments.