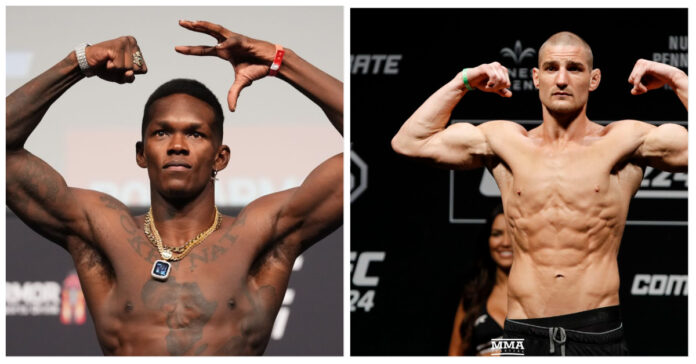 UFC middleweight champion, Israel Adesanya, has advised Sean Strickland to fight through his ego if he wants to get a win against Alex Pereira, and set himself up for a title shot.

At UFC 276, we have a mini middleweight tournament of sorts, as both the title and the number one contender spot are up for the taking. For the latter, Sean Strickland (25-3) is set to take on the dangerous Brazilian striker, Alex Pereira (5-1).

When asked about the matchup, Israel Adesanya gave his two cents on what he thinks Strickland needs to do in order to get the win on Saturday night.

“If I’m being honest, he might get f*cked up, Strickland,” Adesanya said. “If he doesn’t fight with his ego, he’ll get f*cked up.” (H/T MMA Junkie).

“I respect the guy because he just speaks his mind. I speak my mind, too, but he speaks his mind regardless of the repercussions. We’re under the same Paradigm management team, and I’m sure sometimes they have a headache with some of the stuff he puts out, but I respect the fact that he speaks his truth whether I like it or not. You know, freedom of speech is the right in the great USA, so I respect that.”

As the champ said, he’s always spoken his mind and in recent interviews, Israel Adesanya has spoken a lot about his past with Alex Pereira and how he promises the third fight between the two will end differently. Perhaps it is this experience which promoted Adesanya to tell Strickland to fight with his ego.

Strickland will put his six fight win streak on the line against the former Glory kickboxing champion at UFC 276. Strickland also made a big splash in the pre-fight press conference getting the better of Adesanya in the verbal back-and-forth, and maybe even cementing himself a chance to fight for his first ever title if he can get past the surging knockout artist Pereira.