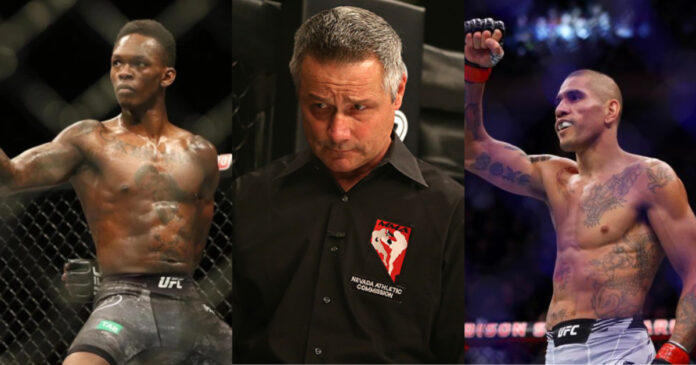 The rivalry between Israel Adesanya and Alex Pereira is set to come to an end this weekend as the middleweights will battle it out in the main event of UFC 281.

Adesanya will aim to retain his title while getting on back on Pereira, who holds two wins over Adesnaya in kickboxing. This fact makes the bout a lot more meaningful for both men, sharing a six year long rivalry that has turned into one of the biggest fights of the year.

Talking on his YouTube channel, Adesanya called for the UFC to bring back Steve Mazzagatti back to officiate the upcoming bout. Mazzagatti became notorious for late stoppages, when fighters were already knocked out.

“Bring back Steve Mazzagatti to ref my fight because I want to hear ‘fight back’ as I’m punching him in the face like 50 times,” Adesanya said.

“I want to hear ‘Fight back, you need to move Alex, you need to move, fight back, now hook him up.’ I want to hear that like 50 times before they drag me off of him. I’m focused solely on this guy. These other last three guys I knew I was going to beat them [Vettori, Whittaker, Cannonier]. This guy [Pereira], I know I can beat him, but it’s because of the reality in this realm, in this timeline.” (H/T The Mirror).

Adesanya would add that his past losses to Pereira made him alter his mindset.

“He’s beaten me in the past so there’s no false sense of arrogance and I have to humble myself in a sense of like ‘No, he can beat me, but I know I can beat him.’ That last fight we had I was touching him, I had him rocked.”

Who have you got, Israel Adesanya or Alex Pereira?