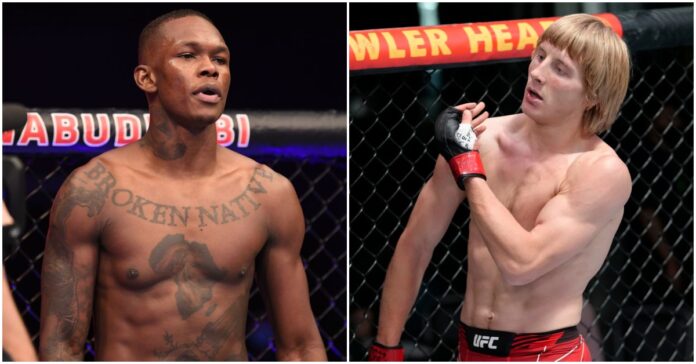 Israel Adesanya believes Paddy Pimblett has been given a favourable match-up at UFC London.

‘The Baddy’ finds himself in a main card slot this weekend against Kazula Vargas who is 1-2 since joining the MMA leader.

Adesanya previewed UFC London on his YouTube channel and spent more time talking about Pimblett than anyone else on the card.

“Another guy with a lot of hype behind him,” Adesanya said of Pimblett. “(He) jumped in the UFC, talked that sh*t and he walked that sh*t too. I like what he’s doing. I like the haircut. I like how he is owning everything and just telling it like it is, speaking his truth.

‘The Last Stylebender’ believes Pimblett is getting built up by the UFC. The Liverpudlian’s easy start to life in the promotion is not something Adesanya had as his second fight in the UFC was against Marvin Vettori.

“They are building him up,” Adesanya said after being informed about the UFC record of Pimblett’s next opponent. “This is the thing, when I jumped in, I was ready to for the (most) dangerous people in the division.

“You can be a hype train but there’s levels,” Adesanya added. “I knew I could jump in the deep end and swim with the sharks straight away. I didn’t have the opportunity like some of these guys. Even Jon (Jones) early on was fighting, not scrubs, but they push you, and once they realise who you are they push you more. That’s no shade by the way. That’s just me stating as it is for myself. I didn’t have the chance to fight a guy who was 1-2.”

Do you agree with Israel Adesanya? Has Paddy Pimblett been given an easy opponent for UFC London?