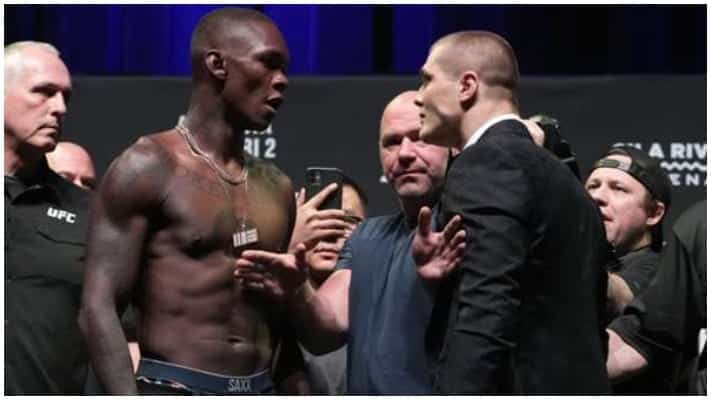 IT’S TIME! The UFC 263 main event is finally upon us! Israel Adesanya and Marvin Vettori will rematch for the middleweight title.

Round 1: Israel Adesanya opens up with a few low leg kicks. Marvin Vettori is pressing forward, trying to put the champion on his back foot. ‘Stylebender’ and Vettori exchange kicks. Adesanya tries for another but it’s caught. Vettori uses it to take this fight to the floor. We are just 90 seconds into this fight and ‘The Italian Dream’ has this fight exactly where he wants it. Adesanya impressivley pops back to his feet. Vettori keeps the fight against the fence but is unable to secure another takedown and Adesanya eventually seperates. Adesanya continues to throw leg kicks despite the takedown threat. Vettori’s pressure is telling, Adesanya throws wildly and misses – Vettori lands. Adesanya lands a hard leg kick, points at his rival. ‘Stylebender’ is starting to flow with his striking right now. He keeps aiming high with his kicks, Vettori has been able to avoid them so far. Round one ends with both men exchanging uppercuts.

Round 2: Adesanya goes back to work with his leg kicks at the start of this round. As Vettori presses forward he’s running into a variety of shots. The Italian is getting off his own punches but Adesanya is catching the eye. Another low kick for the champion. And another! Vettori shoots, he’s got Adesanya pressed against the fence. The champion is throwing elbows to the side of his opponents head. Vettori is forced to bail on the takedown attempt – a big win for Adesanya. Vettori is throwing a lot and missing a lot in this round. Another hard kick from Adesanya. ‘Stylebender’ is playing on the fence, dodging Vettori’s punches. Vettori shoots for a takedown but is again eating elbows. Adesanya seperates and just misses with the head kick soon after. Vettori wades forward with two power shots which Adesanya slides away from. The round ends with Adesanya partially landing a high kick.

Round 3: A huge takedown from Vettori at the start of round three. Adesanya is unable to defend it and Vettori is on top 30 seconds into this frame. Vettori is in half guard, tapping away with shots. Adesanya tries to reverse but gives up his back. Vettori is working for the choke but Adesanya spins and winds up on top. He lands some ground and pound before standing back up. Adesanya jumps back in with punches but Vettori grabs for a leg lock. Another scramble see both me back to the feet. We hava a brief break in the action as Adesanya inadvertantly pokes his opponent in the eye. They get back underway and Adesanya lands some big leg kicks. Vettori lands a few punches of his own before eating two more big leg kicks. Vettori waves forward but misses big with his combo. Adesanya rattles off another leg kick. Soon after he drops Vettori with a huge leg kick. The challanger continues to push forward but he’s not landing anything. He eats a groin strike and we have another break in the action. As soon as we get back to fighting the horn sounds to end round three.

Round 4: Vettori fails with a takedown attempt early and is made to pay as Adesanya lands twice on the exit. Vettori shoots again but is eating elbows to the side of his head. He eventually gets the champion to the floor but Adesanya again reverses the position and gets back to his feet. ‘Stylebender’ hits another big leg kick. Vettori lands a nice right hand. Adesanya goes high and then low with the kick – beautiful stuff. Vettori finally lands a nice low kick of his own. A couple more shots land from Vettori but nothing to make a dent on the champion who’s clearly winning at this point. Adesanya lands another big leg kick which invokes gasps from the audience. Vettori presses the action again and lands a couple of punches. He shoots across the cage but Adesanya uses the fence to stay on his feet. The round ends in a stalemate against the fence, Adesanya slaps his opponent’s backside to keep the fans entertained before the horns sounds.

Round 5: A few exchanges on the feet in round five before Vettori tries to get this fight to the floor. He’s got Adesanya pressed against the fence but not much is happening. The referee warns both men to keep fighting. Vettori drops down but is shrugged off. They are back in the striking range, Adesanya lands a head kick. Another ‘Stylebender’ head kick is dodged by Vettori. Another is blocked – he’s going headhunting in this final frame. Adesanya tries a superman punch off the cage but eats a jab. Vettori tries again for the takedown. He momentarily has Adesanya on the mat but the champion pops back up. Again we are in a stalemate against the fence. This time the referee steps in and separates the two fighters. Vettori continues to press forward but isn’t throwing. Adesanya is picking him apart. Vettori shoots for another takedown with just seconds left but he needs a finish. The fight comes to an end. Israel Adesanya will retain his middleweight title via decision.