LowKickMMA.com
Home UFC News Is Gustafsson vs. Teixeira Merely A Battle Of Runner-Ups? 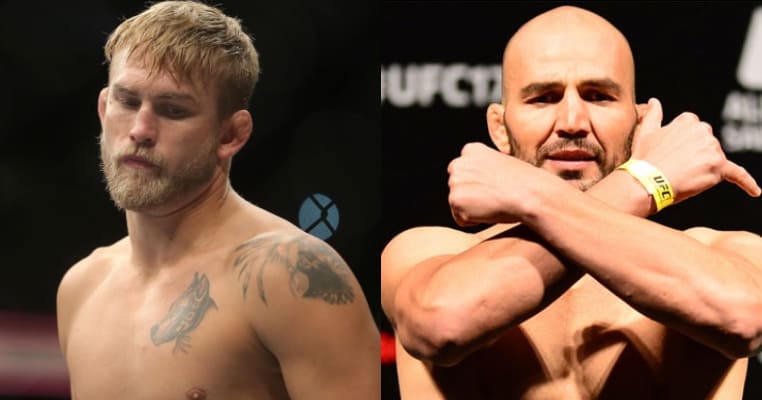 This Sunday night (May 29, 2017), Alexander Gustafsson will face off with Glover Teixiera in the main event of UFC Fight Night 109 from the Ericsson Globe in Stockholm, Sweden.

“The Mauler” made his UFC debut back in 2009 and has since gone 9-4, scoring six stoppage victories in the process. He holds pivotal victories over the likes of Mauricio “Shogun” Rua, Jimi Manuwa and Jan Blachowicz and a win over Teixeira this weekend could very well earn him another 205-pound title shot.

Teixeira, on the other hand, has been in the UFC since 2012, amassing a 9-3 record in the Octagon. The Brazilian slugger holds notable victories over the likes of Quinton “Rampage” Jackson, Ryan Bader, Ovince Saint Preux and Rashad Evans. A win over Gustafsson could too earn him another title shot.

Each man’s resume speaks for itself, but the question here, however, pertains to the status of the light heavyweight division as well as the status of its top two contenders. In other words, does Gustafsson vs. Teixeira simply represent a battle of runner-ups?

Both men have had vast success in the UFC, but both men have also stumbled when nearing dangerously close to the pinnacle.

Gustafsson, for example, has competed in two UFC title fights to date. He took on then champion Jon Jones at UFC 165 in Sept. 2013 in what turned out to be one of the very best light heavyweight title fights of all-time. “The Mauler” pushed Jones to his limits, trading blows with “Bones” over the course of five rounds, while, at times, having him on the brink of defeat. In the end, however, Jones fought back to earn a decision victory.

A similar situation, played out at UFC 192 last October when Gustafsson challenged Daniel Cormier for the light heavyweight strap. Another five round war took place and “The Mauler” once again had his opponent in trouble, as he nearly finished Cormier in the third round. When the final bell rung, however, “DC” was given a split-decision victory, sending Gustafsson home empty handed once again.

Teixeira’s title fight history has played out a bit differently as opposed to “The Mauler’s”. Prior to his UFC 172 title fight with Jones, Teixeira had won an incredible 20 straight fights. He had run through every opponent put in front of him up until that point and was considered to be a legitimate threat to Jones’ strap. That proved to be untrue, however, as “Bones” dominated the Brazilian over the course of five rounds to earn a decision victory. Since then, Teixeira has gone 4-2, with three of those victories coming by way of stoppage.

As far as the division goes, the title will be on the line on July 29 when Cormier faces off with Jones for a second time in the main event of UFC 214. The fight is expected to be amongst the biggest of the year and the winner of the bout could end up facing off with the winner of the fight between Gustafsson and Teixeira – but will it matter?

As history has shown, both Gustafsson and Teixeira have established themselves as legitimate contenders, but when matched up against the division’s top dogs in Cormier and Jones, they have fell short.

With that being said, are Gustafsson and Teixeira simply battling for second place?