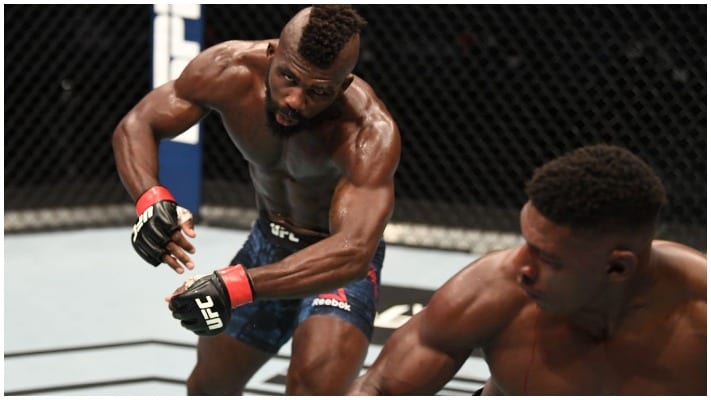 Kasanganay came into the bout with much hype behind him. Earlier this year he earned a UFC contract with a brilliant performance on Dana White’s Contender Series. In his promotional debut, he wowed fans with his dominant display against Maki Pitolo earlier this summer. Buckley on the other hand was not particularly fancied heading into this one. The former LFA and Bellator fighter looked tough but nothing else in his UFC debut loss to Kevin Holland in August.

On the night though things went entirely different to what most people had expected. Buckley bossed the first round before landing a picture-perfect spinning back kick. Kasanganay fell statuesque to the floor and Buckley recorded his first UFC win, picked up a $50,000 bonus and cemented his place as one of the front runners for the knockout of the year award.

Kasanganay took to Instagram to react to his loss in a gracious manner, he wrote.

“@newmansa94 God bless you. It was an honor to step in the Octagon with you and to do what I love. Safe travels to you and your team Beautiful shot. Way to fight.

“I will improve. To the @ufc and all staff members thank you for making fight Island a possibility . You are a top notch organization. I know the best is yet to come. God is great and He has never failed me. Never will. He’s so faithful. I look forward to to the opportunity to getting back into the Octagon. Back to work. God bless you. Thank you to my Dad such a blessing to have you in my corner , @nanucosta , and @bryan_barberena for cornering you had me prepared. Thank you so to my @gymotribe for working with me. You all have a special place in my heart. The best is yet to come.

“Yet what we suffer now is nothing compared to the glory he will reveal to us later.”
Romans 8:18 NLT

Do you think Impa Kasanganay will bounce back from this loss?