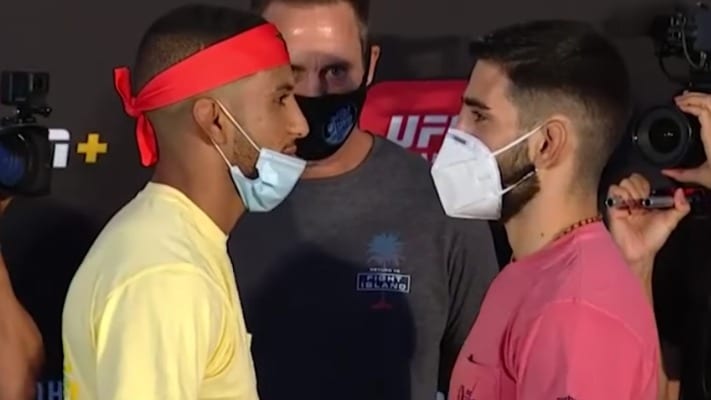 Opening up the UFC Fight Island 5 main card is a featherweight clash between Youssef Zalal and Ilia Topuria.

Round 1: The two touch gloves as we get started. Zalal misses a body kick. Topuria is advancing aggressively. Topuria responds with a right hand as Zalal attempts a low kick. Zalal partially lands a head kick. Zalal continues to use good footwork and lands a body kick. Topuria level changes and goes for the takedown. Zalal defends well and reveres Topuria against the fence. Topuria, however, suplexes Zalal to the ground beautifully and is now in full mount. Topuria looks to lock in an anaconda. Zalal continues to fight it but finds himself in a guillotine choke. It’s switched to an anaconda but Zalal scrambles and is on his feet. He separates and the round comes to an end.

Round 2: Zalal goes for the takedown now but Topuria is defending well. Topuria lands some hammer fists but Zalal continues to work. They separate. Zalal appears to be much slower now as Topuria advances forward. Topuria lands a huge one-two but Zalal eats it. Topuria quickly takes him down soon after. Topuria has transitioned to a mounted guillotine but Zalal gets out of it. Topuria transitions to his back. However, Zalal reverses and now has Topuria’s back! Topuria shrugs him off and lands some ground and pound. Zalal looks for a kneebar but to no avail as the round ends.

Round 3: Topuria level changes and is back on top of Zalal. Zalal threatens with an armbar but Topuria is not in serious danger. Topuria looks to attempt another submission but Zalal gets out of it. Topuria attempts another takedown but Zalal defends it and goes for a guillotine now. However, Topuria gets out of it and is on top again. Zalal gets up but Topuria has his back and drags him to the ground again. They’re back on the feet and Zalal looks like the much fresher fighter now. Zalal partially lands a head kick. Topuria is clearly fatigued here. Topuria ducks a left and beautifully-timed takedown. Zalal tries a flying switch knee but Topuria catches it and ends the round on top.