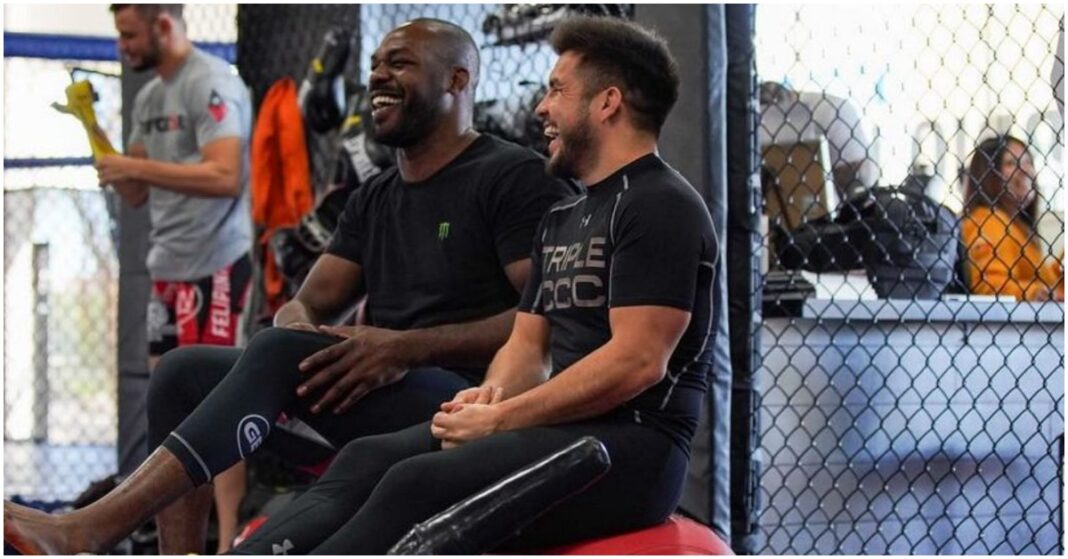 Henry Cejudo is impressed by Jon Jones after training with the former light-heavyweight champion.

The former UFC light-heavyweight champion hasn’t fought since defending his title against Dominick Reyes at UFC 247 in February 2020. Jones has since relinquished his title and announced his intention to compete at heavyweight moving forward. While ‘Bones’ has been bulking up his team has been struggling to come to financial terms with the UFC for his divisional debut.

Unfortunately, that’s has been the biggest issue in the life of Jon Jones, who was recently kicked out of his long-time gym after being arrested on domestic violence charges.

Since then, Jones has been training at Cejudo’s Fight Ready gym in Scottsdale, Arizona. The former dual-weight UFC champion spoke about having been in the gym with Jones during a recent appearance on  Josh Thomson and John McCarthy’s on Weighing In podcast.

“I tell you what, man. That dude is a gifted a** human, bro. Like as a fighter you know what I mean. It’s like this dude has natural abilities,” Cejudo. I am a lightweight and I can’t even see what he just threw. You are a heavyweight… Jon’s a competitor. He wants to put a stamp on top of a stamp. He is already the GOAT in the sport of mixed martial arts. There’s nobody there. I think the second person that comes behind him is Demetrious Johnson just based on his title defenses… Jones is in a mountain of his own.” (Transcribed by Sportskeeda)

What’s next For Henry Cejudo?

Cejudo hasn’t fought since defending his bantamweight title at UFC 249 in May 2020. The 34-year-old stopped Dominick Cruz inside two rounds before announcing his retirement from the sport.

Since then, Cejudo has remained very vocal and always seemed intent on returning to the sport. The Olympic gold medallist has been persistently calling out Alexander Volkanovski but the featherweight champ seems uninterested in the fight and the UFC doesn’t seem too keen either.

Do you think Henry Cejudo and Jon Jones will fight in 2022?