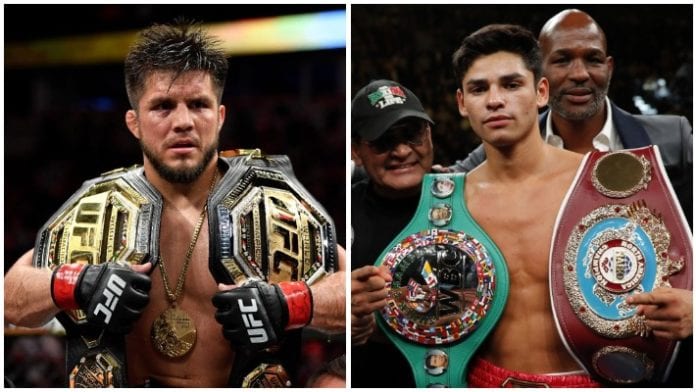 Former UFC dual weight champion Henry Cejudo has revealed he is in talks for a fight with up and coming boxing star Ryan Garcia and it will take place in Saudi Arabia.

Speaking to TMZ Sports Cejudo revealed he has lined up “the money guy that’s willing to pay both of us. It’s just up to little Ryan ‘Candy’ Garcia to sign that contract.”

‘Triple C’ went on to break down a potential fight with Garcia who he doesn’t particularly rate. Cejudo believes with the right team and the right game plan the young boxer is a very beatable opponent, he said.

“I really don’t think [Ryan Garcia’s] that good,” Cejudo said. “I really don’t, and I think with a proper team, the right game plan, I believe I can make him bend the knee in front of Oscar De La Hoya. I feel like I have the tools, the power, the strength, the experience and we wanna make this happen.”

Cejudo concluded the interview by telling Garcia to sign the contract so he can knock him out and force him to bend the knee, he said.

‘Triple C’ recently retired from MMA after beating Dominick Cruz inside two rounds at UFC 249. At just 33 years old the Olympic gold medallist still appears to be in his fighting prime and willing to compete in a different sport for more money.

Do you think Henry Cejudo will actually cross over into boxing to fight Ryan Garcia?