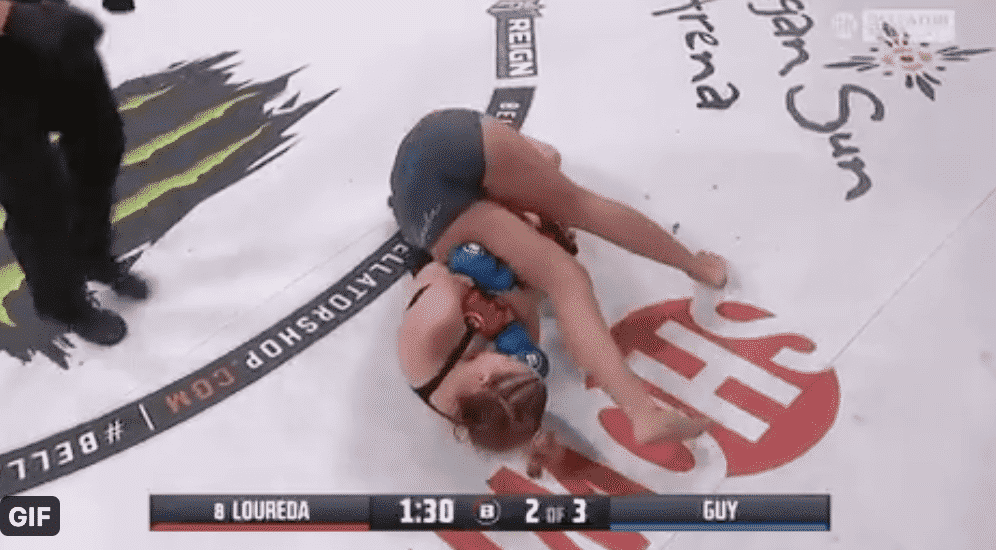 Hannah Guy surprised everyone but herself at Bellator 259. She handed rising star Valerie Loureda her first professional loss via unanimous decision.

Originally scheduled as part of the prelims, Bellator moved the fight to the main card after the Christian Edwards vs. Ben Parrish fight was canceled. Before the matchup, betting sites had Loureda listed as a high as a -725 favorite. However, Guy, a relative unknown, proved the oddsmakers wrong.

Guy (3-1 MMA, 1-0 Bellator) and Loureda (3-1) went the distance. Guy won all three rounds on two of the judges’ scorecards (30-27, 29-28, 29-28). The only round in question was the first, in which Loureda landed a 2-3 combo and dropped Guy with a left hook. Loureda attempted to rush in and finish the fight, but Guy weathered the early storm and got back to her feet. Guy then changed levels and secured a takedown following up with a tight armbar attempt to finish the round. Between Loureda’s knockdown and Guy’s submission attempt, it’s understandable that the judges split on who won the round.

The second round was much easier to score, as Guy came out even more aggressive than in the first and immediately changed levels. Loureda initially stuffed the takedown, but Guy reversed the position and secured full mount with plenty of time left in the round. Guy secured an S-mount trapping Loureda’s arm and raining down punches and elbows to the point that the referee appeared close to stopping the fight.

In between rounds, Loureda’s corner begged her to stay on her feet as it was clear that Guy was getting the better of her in every grappling exchange. Loureda, however, continued to engage Guy on the ground.

Guy wasted no time attempting to take the fight back to the ground in the third round. She jumped for a guillotine, but Loureda escaped and seemed to follow her corner’s advice, backtracking to stand up. But all of the grappling exchanges had taken a toll as Loureda was visibly exhausted. Guy took advantage by pushing the fight back to the ground, attempting multiple submissions before the final horn.

After the fight, Guy was complementary of Loureda’s defense. “I thought I was gonna finish with the triangle honestly,” she said. “She just slipped right out of there, so that was awesome of her. Her defense was really good. I was really impressed by that actually. I didn’t know what her ground game was, but it was a lot better than I thought. No offense to her.”

Are you surprised that Hannah Guy was able to defeat Valerie Loureda?