LowKickMMA.com
Home UFC News Greg Hardy Reveals He Has Been Promised A Return To The UFC... 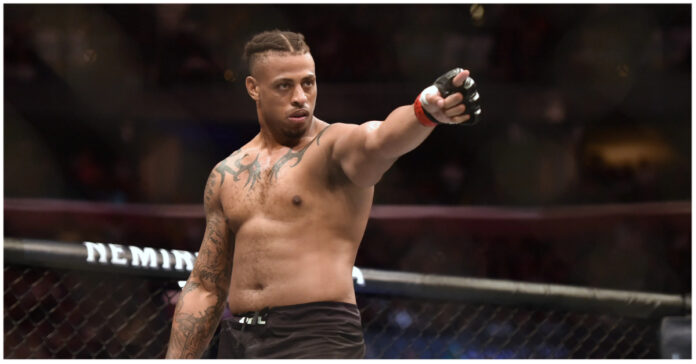 Former NFL defensive end Greg Hardy isn’t counting out a UFC come back down the road.

Hardy, a one-time NFL pro-bowler, hopes to return to the company with improvements to his game. Hardy fought out his UFC contract and his departure became official in March.

Despite recent setbacks, ‘The Prince of War’ hinted at another shot in the UFC once he improves his skills on the mat.

“They hit me up, told me ‘If you get some wrestling going in another promotion, we’d be glad to sign you back,'” Hardy told Chris Van Vliet. “I sent them my thank you’s and love and went looking for where I can throw these hands and found BKFC.”

Hardy (7-5, 1 NC) suffered three straight knockout losses to end his UFC run. His latest fight came against Sergey Spivak at UFC 272 on March 5, where he suffered a first-round TKO loss.

“We’ll see what he does outside of the UFC,” Dana White told MMA Fighting’s Jose Youngs. “He came in here and didn’t have a bad run.”

It didn’t take long for the former UFC heavyweight to find a new home as he signed a multi-fight deal with Bare Knuckle Fighting Championship (BKFC) last week.

“I’m excited to start working with Greg,” BKFC President Dave Feldman said in a statement to MMA Junkie. “He wants to test himself in bare-knuckle and has been training for a fight for the last couple of months. Heavyweight is one of our deepest divisions and his skill set fits right in.”

Hardy isn’t new to change. He spent his NFL career with two different teams- the Carolina Panthers and the Dallas Cowboys. He also made the transition from the gridiron to the octagon in 2017. Hardy was undefeated as an amateur before securing a UFC contract on Dana White’s Contender Series.

Neither Greg Hardy’s pro boxing debut date nor his opponent has been announced at the time of writing.