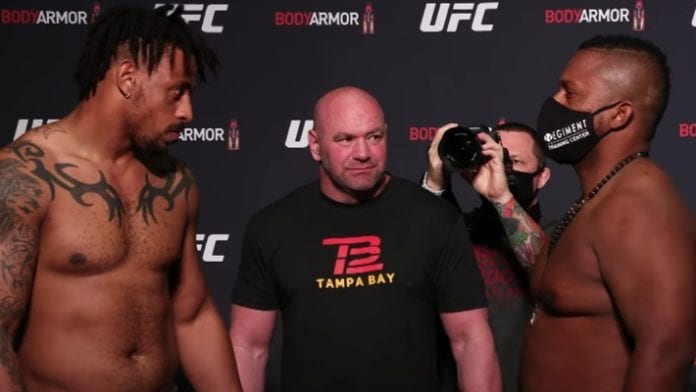 Kicking off the UFC 249 main card is a heavyweight bout between Greg Hardy and Yorgan De Castro.

Round 1: Hardy starts off with a leg kick but is countered with a big right. De Castro is swinging with fight-ending haymakers as Hardy seems to be wary of his power. The pair exchange leg kicks. They both start to swing with reckless abandon but neither fighter is seriously hurt from the flurry. Hardy seems to be affected by De Castro’s leg kicks as the first round comes to an end.

Round 2: De Castro continues with the leg kicks as Hardy’s left thigh is very red. Hardy answers with two leg kicks and receives one in reply. Hardy checks a leg kick and avoids two big strikes from De Castro. Hardy seems to be going for De Castro’s legs now. De Castro hasn’t done much this round compared to the first as Hardy continues to advance and be more active. Hardy misses an overhand right as the round comes to an end.

Round 3: Hardy opens the third with a big right hand. De Castro seems more aggressive again. Hardy lands a big leg kick. De Castro slips as he attempts a leg kick but appears fine on the ground. After some leg kicks, Hardy allows De Castro to stand up. The pair don’t engage much until the end of the fight. Hardy might have done enough to earn the win.