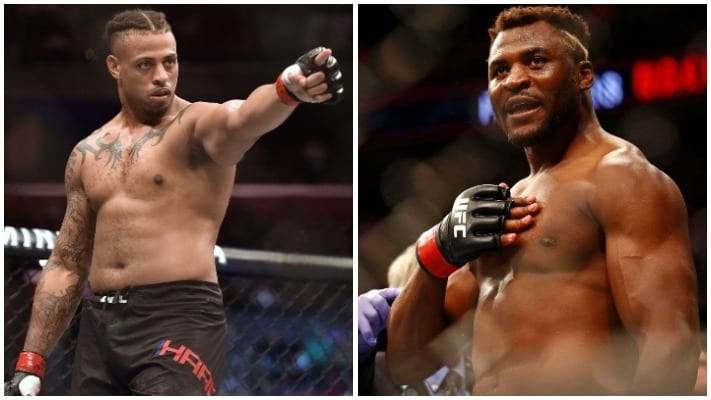 Despite the explosive qualities of UFC heavyweight contender Francis Ngannou, Greg Hardy does not view him as an athlete.

Hardy is coming off his second win in the UFC when he knocked out Juan Adams at UFC San Antonio earlier this month. The former NFL star has since called for a top 15 opponent according to UFC president Dana White.

While he might need a few more fights before he gets his wish, Hardy will be looking to continue building his game — and that means not just relying on his knockout power. In a recent podcast, he pointed to how Ngannou was devastating everyone in the UFC before his wrestling was exposed:

“Francis Ngannou is a fighter that has athletic ability. He’s not an athlete,” Hardy said (via MMA News). “Just seeing what happened to Francis with Stipe was a warning, but from the beginning, I always told everybody I want to be a well-rounded fighter. I don’t want to focus on one thing and be one-dimensional. I want to be the man. And the only way you can do that is to take over.”

In fact, Hardy can point to many in the sport who are not so much athletes as they are just fighters:

“I don’t think there’s that many out there, though,” Hardy added. “It’s starting to come alive. It’s starting to be OK to come over, but most people been in the fight game so long they lost (athleticism) and conformed to the basic movement.”

Maybe one day we could see Ngannou vs. Hardy and see who comes out on top — the fighter with athletic ability or the athlete who can fight.

What do you make of Hardy’s comments?