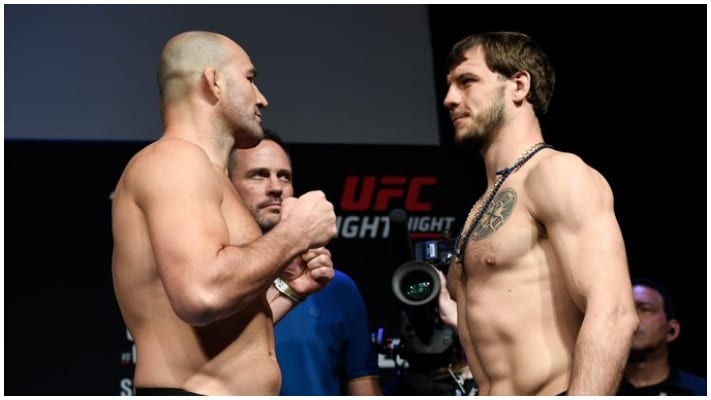 Glover Teixeira vs. Nikita Krylov in a light heavyweight bout continues the main card of the UFC Vancouver event:

Round 1: Teixeira caught a body kick and took him down to the ground where he got side control. Krylov was doing a nice job of landing some elbows off his back which sliced opened Teixeira. He eventually gets his back. He’s searching for a choke, but Krylov was defending well. Teixeira softened him up with strikes but Krylov shook him off and got full mount. Krylov got his back and locked in the rear-naked choke but Teixeira rolled out.

Round 2: Both guys came out and were throwing bombs. Krylov is doing well at staying out of range and using his reach. Krylov lands a low kick and eats a hook but was constantly on his bike. Krylov landed a nice combo as the former title contender was moving forward as he was getting frustrated. Krylov scored a late round takedown.