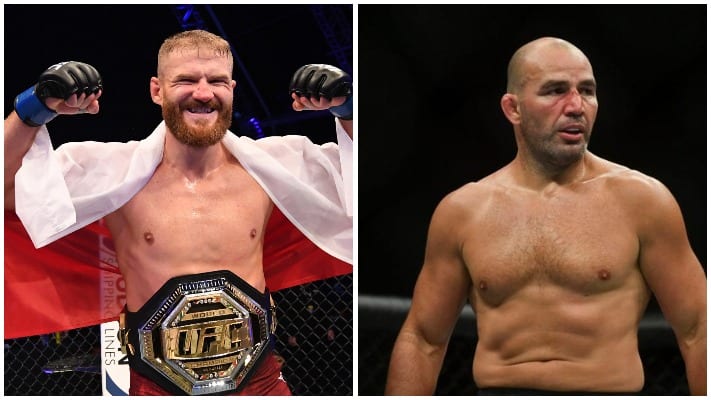 Glover Teixeira is confident he will get the next crack at Jan Blachowicz.

Teixeira made it four wins in a row following an impressive third-round submission win over Thiago Santos at UFC Vegas 13 this past weekend.

Ideally, it should be a given that the Brazilian would be next for a title shot. However, UFC president Dana White revealed before the event that middleweight champion Israel Adesanya would move up to challenge Blachowicz next in an attempt to become a double champion.

White has since admitted plans may have to change following Teixeira’s win while Blachowicz is also open to defending his title against him next.

And when it’s all said and done, Teixeira believes White will do the right thing.

“I think I proved a point in here,” Teixeira said in a recent interview with Ariel Helwani (via MiddleEasy). “I’m the number one contender now. It’s kind of upsetting for Adesanya to come in and jump right in line. I think Adesanya is new at 185 still, Blachowicz is new at 205. Look, it seems that if there’s a super fight, it shouldn’t be now. They need to build up to this. Defend the belt a couple of times for Blachowicz. That’s against me, I guess. Defend the belt against me.

“… I did not speak to Dana. I was looking for him, I wanted to to talk to him in person but didn’t get the chance. I think Dana’s a business guy. He’s going to do (what’s good for) business. But I’m telling you this, he’s a fair man. He’s a fair man. You know, I see some people complain about Dana. I’ve got no complaints about Dana man.”

In the end, it’s all out of Teixeira’s control. But given how everything is transpiring in terms of timing, he is confident he will get the next shot soon.

“I’ve been very positive that I might get the next shot,” Teixeira added. “Blachowicz already said that he is willing to fight me. I heard that Adesanya is having complaints about timing. So I’m very confident, and haven’t been thinking about other things.”

Teixeira’s only attempt at UFC gold came in 2014 when he suffered a unanimous decision defeat to then champion Jon Jones. It would be some story if he was able to become a champion at the age of 41.

Do you think Teixeira will get the next title shot?