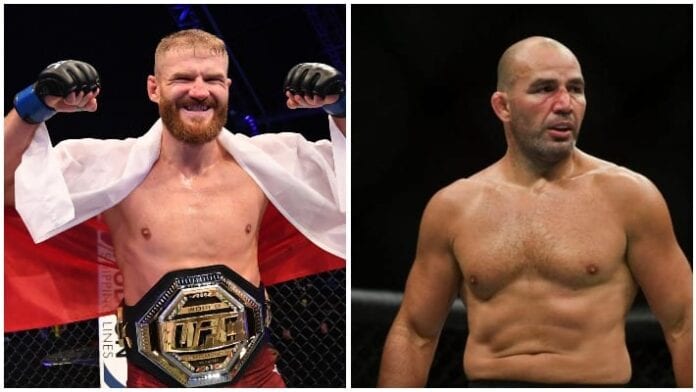 Glover Teixeira may just have earned the next light-heavyweight title shot with his emphatic third-round submission win of top contender Thiago Santos.

The 41-year-old emerged victorious from a back-and-forth main event at UFC Vegas 13 last night. Teixeira used his wrestling, ground strikes, and submission skills to pull of a second consecutive upset win. Teixeira stretched his winning streak to five against Santos who was heavily favoured to beat him. As was Anthony Smith when he fell to a fourth-round TKO loss at the hand of the former title challenger early this year.

UFC light-heavyweight champion Jan Blachowicz was seriously impressed with his 205lb rival. The Polish striker is currently believed to be squaring off against the middleweight king, Israel Adesanya but took to social media to explain how Teixeira could leapfrog ‘Stylebender’.

“Great fight and incredible run by @gloverteixeira,” Blachowicz wrote. “You totally deserve to fight for the title and get taste of the #LegendaryPolishPower. If Adesanya can’t wait till March, let’s go #UFCVegas13.”

UFC president Dana White was also very impressed with Teixeira. He told Laura Sanko on the UFC Vegas 13 post-fight show that Brazilian had made him rethink the current light-heavyweight title picture, he said.

“I was sitting listening to him give his interview – he’s not wrong. It’s like, ‘I deserve the shot, I’ve been here forever.’ He’s on a streak, he looked great tonight. What’s funny is, every time I count this guy and think that I don’t know if you got it in you, he proves me wrong. He looked incredible tonight.”

“That’s something we need to figure out,” White said. “But I heard him and I agree with him and I’m taking him serious. So, yeah. I’m not going to doubt this guy any more.” (Transcribed by MMA Junkie)

Do you want to see Glover Teixeira get the shot at UFC light-heavyweight champion Jan Blachowicz?