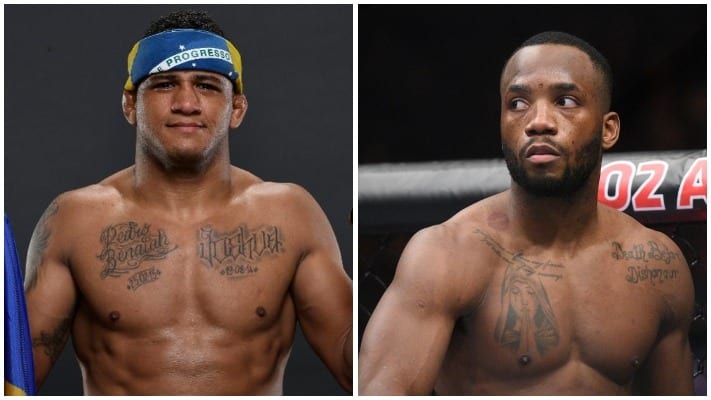 Gilbert Burns is dead set on fighting Leon Edwards next and he’s letting everyone know it.

In July, Burns got back in the win column with a dominant grappling display against Stephen ‘Wonderboy’ Thompson at UFC 264. Post-fight, he name-checked Nate Diaz, Jorge Masvidal, and Edwards as fellow welterweight contenders who he’d like to face next.

On Monday, ‘Durinho’ dialed in on Edwards who appears to be next in line for a shot at the welterweight belt after racking up nine straight UFC wins.

The Brazilian posted a clip from the UFC 265 post-fight press conference that showed Dana White saying Edwards will “probably” need to fight again in order to secure a 170lb title shot.

‘Rocky’ fired back with an alternate opponent suggestion for Burns.

Burns then angrily compared his record to that of his rival.

“Your best win is Nate Diaz who is unranked and the last time he beat a true WW is….NEVER, you are on a 9 fight win streak and nobody gives a shit about you. I’ve beat legends in Woodley, Maia and WB…come get this smoke…BRUMMIE CUNT”

“Nate beat you, I’ll bury you”

“COUPLE FACTS you had 8 weeks to fight Gunnar, I had 8 days. He mounted you and you held on for life. I beat up Gunnar in his country….fight me BRUNMIE CUNT lol”

Edwards then reminded Burns of the time he sat out to wait for a title shot rather than fight him.

Burns insisted that he was in a much stronger position than Edwards currently is.

“Well I got a title shot, you don’t have one and Dana said you need one more fight. I’m ranked higher than you, fight me. I dare you “Handsome bastard”

‘Durinho’ ended the conversation by stating he is the only option for Edwards who risks being overlooked for a title shot if he refuses to fight.

“Truth of the matter is that I am helping you. If you don’t fight you will get skipped AGAIN. They are going to take you out of the rankings AGAIN Sitting out won’t help and @GamebredFighter isn’t going to fight you because he is still sleeping BRUNMIE CUNT lol”

Do you want to see Gilbert Burns vs. Leon Edwards?