GSP reveals the heated argument he had with Dana White, and also blames the UFC for harbouring drug cheats to protect their monetary interests…

The UFC’s relationship with a lot of their fighters can be described as rocky, at best, but you’d think their champions would have a little bit more of a positive opinion about their employers. Jon Jones recently came out and said he knows the UFC shielded Vitor Belfort before UFC 152, and that ‘The Phenom’ was on steroids when he defeated him by submission. These accusations were responded to by the UFC, who claimed ‘Bones’ was ‘100% inaccurate.’

Now another former champion has some pretty damning comments about the promotion he helped build, yep, we are talking about Georges St-Pierre. ”Rush’ is still on his extended hiatus after relinquishing the belt in 2013, and recently blamed Dana White for his absence from fighting. The UFC president recently scoffed at St-Pierre’s talk of a comeback next year, and that seems to have got under the former champ’s skin. Talking with The MMA Hour, GSP went even further in to the events following his UFC 167 split decision win against Johny Hendricks:

“I’m not going to tell you exactly what was said,” St-Pierre said. “But I was very pissed off and I used a lot of F words. …  I was very angry, they did not support me because of the testing issues for the doping, they did not support me  for the anti-doping. And I told them, why they didn’t support for this, and I didn’t understand it. I said ‘you guys need to wake up, because a lot of people are cheating, and stuff, and it’s a freaking joke. You guys are kind of protecting these guys, and it shouldn’t be like that.’ I was very angry.”

The obviously frustrated St-Pierre alleges the UFC also refused to allow him entry to the post-fight press conference, and even stole the belt from him in the wake of his controversial decision victory:

“I didn’t know something bad was going on until they say ‘you’re not allowed to go to the press conference,'” St-Pierre said. “I found that it was kind of weird, I was waiting in the locker room a long time, it was like, that was kind of weird. It wasn’t until afterwards that I realized what was going on.”

“I was getting stitched up,” St-Pierre said. “I don’t mind the belt, it’s a nice gift. Every time I win a new belt, I used to give it as a gift as people who helped me, The first one I won, I gave it to my mother, the second one I put in my workout place. All the other ones I win I give to people who helped me … They took the belt. It’s okay, its only material, importance is the memory I kept from it, nothing take away from me.”

The recent Zuffa lawsuits filed by dishevelled ex-fighters, and the plethora of interviews with former employees blasting the UFC’s practices all add to St-Pierre’s argument. His next comments were far more sinister and less debated by athletes who value their jobs in the promotion.

“Now that I look back, I know that they knew,” GSP said. “I’m not stupid, I know it’s business, you spend a million dollars promoting the fight, so they lose a lot of money. it’s not in their best interest to make the drug test the best possible, because they lose money if the fight gets cancelled. So I told them it might take a year, you’re going to lose money for a year because a lot of your main stars, a lot of your guys, will fall and test positive, they might hurt the image of the sport. But after a year, it will put back everything straight.” 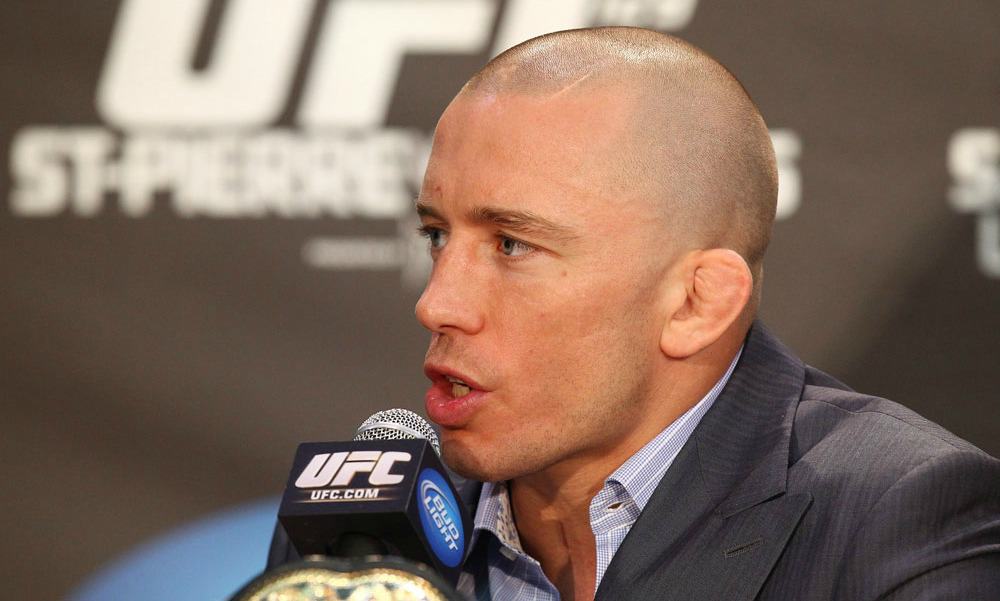