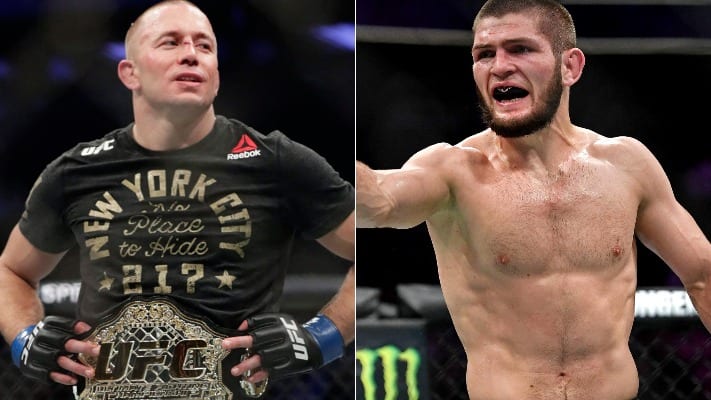 At the beginning of this year, we heard that Khabib Nurmagomedov wouldn’t fight Conor McGregor again even for $100M.

The undefeated Russian retired from the sport after choking out Justin Gaethje at UFC 254 in October.

Last week we heard Dana White is set to meet with Nurmagomedov in Abu Dhabi to talk about his fighting future. The chat took place on Friday and White is set to announce the outcome at UFC Fight Island 7 which takes place tonight.

Khabib has repeatably talked up a fight between him and UFC legend Georges St-Pierre, while the Canadian has so far refused to commit to a fighting comeback. ‘GSP’ hasn’t fought since winning the UFC middleweight title by beating Michael Bisping in 2017.

In the interview with ‘Tim and Sid’ St-Pierre seemed more open than ever to a potential fight with Nurmagomedov, he said.

“It freaking excites me, man. Khabib is bigger than me. He’s a better weight cutter than me, probably, and I’m older than he is, and that plays too. We need to know the terrain. It’s one of the principles of the art of war. I need to know if I fight in a place that he knows the terrain and I don’t, it’s an advantage for him. Right now it’s an advantage for him. I don’t have the structure to train, and he does. So there needs to compromise on both sides to make the fight happen.” (Transcribed by BJPENN.com)

By terrain, St-Pierre is referring to the weight class the fight would take place. GSP fought his last fight at middleweight and has spent the majority of his career at welterweight. Nurgamedow has fought mostly at 155 lbs. There will need to be a compromise on the weight if these two great fighters are going to square off.

Would you like to see George St-Pierre vs. Khabib Nurmagomedov?