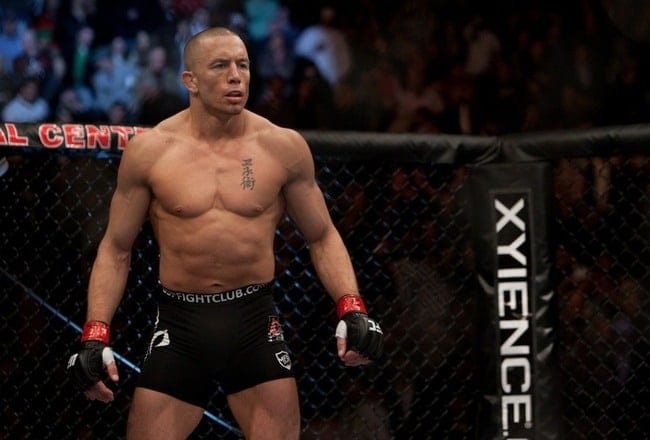 The UFC once relied heavily on their welterweight champion and Canadian national hero Georges St-Pierre. ‘Rush’ came up through the golden era of the division’s history, seeing off some of the greatest names in the promotion’s history during his nearly ten-year stint in the promotion. St-Pierre won the title twice through his illustrious career, and his second reign was six years long. He eventually gave up the belt in late 2013 after a controversial UFC 167 split decision win over Johny Hendricks, amidst a torrid storm of media, the effects of which are still being felt today.

Stating his mental health and the poor drug testing standards in MMA (mixed martial arts) as the main reasons behind dashing from the limelight, St-Pierre has since gone on to star in movies such as ‘Captain America’ and the ‘Kickboxer’ remake with Jean Claude Van Damme. With plenty of speculation along the way about a potential MMA/UFC return, GSP tells GNP1.DE via Bloodyelbow.com about his current thoughts on a comeback:

“There is different reasons of why I took a break. What I can say is, I’m not sure, I don’t know right now if I wanna come back or not. I’m not sure when, if I do. So it’s still the same answer as before,”

“I’ve been doing this sport at the elite level for a very long time. I’ve been champion for like nine years, eight years. And it’s a very stressful life,” St-Pierre said. “You have a lot of criticism, a lot of pressure and critics, and everything put together, it hit you a lot. You don’t wanna hear the critics sometimes, but it’s still there. I’m a sensitive guy, and it hit you, hit you, and you’re never good enough and stuff. So for my mental health, I needed to step out and get a little bit of a social life.”

The pressures of being a modern day UFC star go far beyond those that ‘Rush’ was accustomed to in the older days; media obligations, world tours, heated rivalries and countless promo cuts make it a very busy trade to master. At the top of his game, St-Pierre was one of the most recognizable faces in combat sports, and undoubtedly the biggest Canadian sports star. He continues:

“Mixed Martial Arts is something that I’ve done all my life, you know, I would never stop training, no matter what, if I come back or not,”

“I became world champion by training for fun. And then the fun became business, and business became stressful, and then you lost fun. I didn’t have fun at the end, I did it because I had to, not because I wanted to. I should have actually stopped maybe one fight before, or two fights before, but I couldn’t. It was always constantly another guy challenging me. Carrying all this weight on my shoulders, I felt like I needed to do it, instead of wanting to do it.”

Clearly the game he once ruled so dominantly had become a tax on the Tristar UFC champion, and it is beginning to look like we’ll never see him step in the octagon again. We’ve grown used to seeing legends of MMA simply fall from the pinnacle and never recover, but there’s something about GSP’s semi-retirement that just leaves a big gap, too many unanswered questions maybe?

Perhaps calling it quits before the inevitable decline was for the best, but opposite to that, the hanging up of the gloves is considerably easier to accept when the speed and power start to fade.