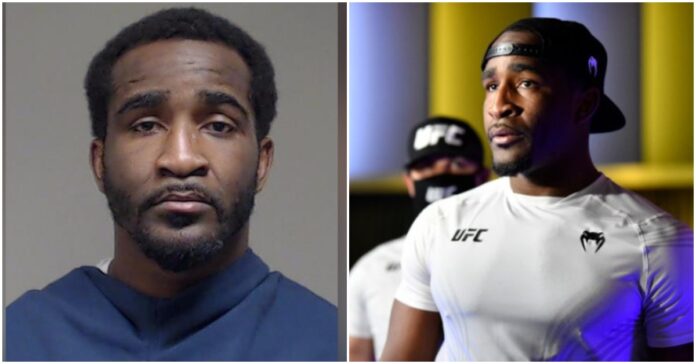 Geoff Neal was jailed just a little more than two weeks out from his fight against Santiago Ponzinibbio which is due to take place on December 11 at UFC 269.

‘Handz of Steel’ was arrested in the early hours of Thanksgiving on misdemeanor charges of driving while intoxicated and unlawful carrying a weapon.

According to a Collin County Sheriff’s Office document obtained by MMA Junkie, Neal was arrested at 3:47 a.m. on November 25. He was booked into the Collin County Jail in McKinney, with his bond amount set at $1,000 for each offense before being subsequently released from custody at 8:08 p.m.

The UFC reacted to news of Neal’s arrested in a statement issued to ESPN.

“UFC is aware of the recent situation involving Geoff Neal,” the promotion wrote. “The organization has been in communication with him and is in the process of gathering more details. Neal’s bout at UFC 269 on December 11th remains as scheduled.”

Brandon Barnett, Neal’s attorney, told ESPN that Neal volunteered for a blood test when he was arrested, and no charges will be filed until those results come back. Barnett believes his client was not over the blood-alcohol legal limit of 0.08% and that all charges will be dropped when the test results come back, as the gun carried by Neal was legal.

“If it turns out he was not legally intoxicated — which we expect the blood test will show — there won’t be a gun charge, either,” Barnett said.

Neal appeared to be a genuine welterweight title contender until he battled a mysterious infection that led to sepsis and congenital heart failure. The UFC standout believed he was going to die during a weeklong stay in the intensive unit.

Thankfully, Neal returned to full fitness and back to the Octagon. Unfortunately, things haven’t gone his way since then and he has suffered back-to-back losses to Stephen Thompson and Neil Magny.

Do you think Geoff Neal will still fight at UFC 269?