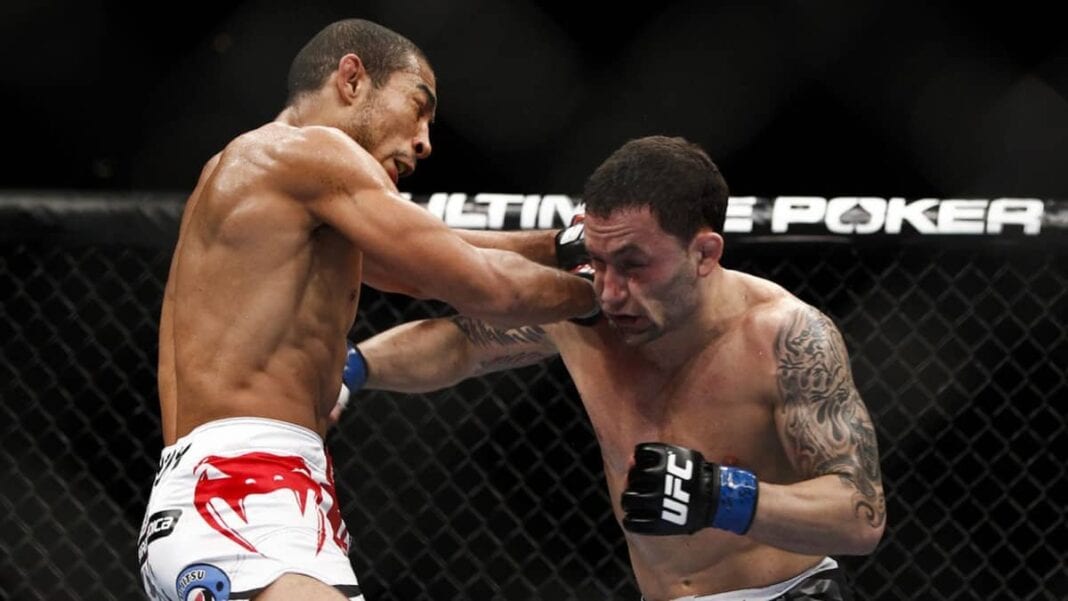 A former lightweight champion, Frankie “The Answer” Edgar dropped down in weight back in 2013, receiving an immediate title shot at then champion Jose Aldo.

Edgar would come up short in a very close five round affair, and has since rattled off five straight victories including three finishes, putting himself right back on the brink of title contention.

Aldo has since lost his long-held strap, suffering a disappointing 13 second knockout loss to Conor McGregor last December at UFC 194.

Both “The Answer” and “Scarface” have been campaigning for a shot at the Irish knockout artist, but the UFC has actually paired them off opposite each other in an interim title tilt at July 9’s UFC 200, the same event in which McGregor will rematch Nate Diaz in a 170-pound scrap.

While Edgar obviously had his eyes set on the ‘money fight’ with the “Notorious” one, he’s also excited to get his chance at redemption with Aldo:

“I’ve got Jose on my mind 24/7 now,” Edgar told FOX Sports. “He’s the most dominant featherweight that we’ve ever had. He stumbled his last fight but he’s still dangerous. I know he wants to get back at Conor and I know I want a chance at Conor as well so I’m definitely excited for this fight.

“It was a close (first) fight, a lot of people feel I may have won or it was super close and just to have a chance at redemption is always a good thing.”

As far as his upcoming rematch goes, Edgar feels as if the McGregor knockout may have seriously affected Aldo, who now has the pressure riding on him:

“He could be second-guessing himself,” Edgar said about Aldo. “Conor threw one punch and it’s over in 13 seconds, that’s a tough pill to swallow and we’ve got a lot of pride as competitors. That eats at your pride and your ego. He’s going to have to deal with all these emotions leading up to this. He didn’t lose for 10 years, he’s a winner and I’m sure he’ll bounce back. I’m expecting this fight to be all it’s cracked up to be.

“It’s going to be over three years at this point (since the last fight). I’m very comfortable, I feel like I’m coming into my own more and more and I’m coming in there to finish him 100 percent. He has a lot to try and bounce back from and he’s going to have a lot of pressure on him but I feel like it’s my time right now.”

Despite starting off slow the first time around, and taking over later in the fight, Edgar plans to control much of the action against Aldo in July. In fact, “The Answer” guaranteed a finish:

“I definitely think if I touch him and string my punches together, put that pressure on him I’m going to make him wilt and I’m going to put him away,” Edgar said.

Which man will secure the interim strap, and buy his ticket to a showdown with McGregor?