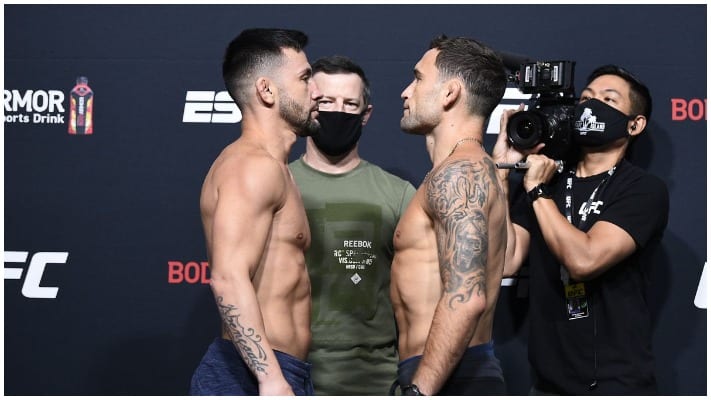 IT’S TIME! The UFC Vegas 7 main event of the evening is finally upon us. Pedro Munhoz is set to welcome former lightweight champion, Frankie Edgar, to the bantamweight division. Who will win? Let’s find out…

Round 1: Pedro Munhoz is firing in leg kicks early. He drops Frankie Edgar with one of them. The former lightweight champ makes his opponent pay on the next kick – he lands a four-punch combo. Edgar is looking good with hands right now. He’s throwing lots of volume while Munhoz is looking to head off his opponent and land the one big punch. Munhoz catches Edgar with a big shot but ‘The Answer’ takes it well. After a momentary stoppage for a misplaced gumshield, we are back to it. Munhoz land another eye-catching shot. Edgar comes forward with volume but the shots have nothing on them and seem to be more to create space than anything else. Another flurry for Edgar which catches Munhoz. Edgar shoots and its shrugged. Munhoz lands big. Frankie closes the round out with a one-two of his own. A great opening round in this UFC Vegas 7 main event.

Round 2: Edgar opens the round with a takedown attempt. It’s shrugged off but ‘The Answer’ lands big on the break. Munhoz is cut pretty bad but nothing is stopping his forward pressure. The pair clash and Edgar drops. Munhoz tries to swarm and just misses the knee as Edgar stands up. Edgar is using the Brazilians aggression against him in round two – Munhoz is eating lots of shots. Edgar gets a takedown but Munhoz does well to pop back up. Jab-uppercut from Edgar – beautiful stuff from Edgar! He’s mixing in takedowns too now. The fight again hits the floor for a moment but Munhoz again does well to pop up. Again, Munhoz comes in aggressive, misses wildly and eats two shots for his troubles. Another big left from Edgar. ‘The Answer’ eats a groin strike just before the horn sounds to end round two.

Round 3: Munhoz opens up with a couple of jabs at the start of round three. No signs of Edgar slowing down. Constant movement and lots of volume from the veteran. Munhoz really utilizing his jab well in his round. Lot’s of low kicks too. Huge left hook from Edgar! Those Munhoz leg kicks are taking a toll. Edgar is moving gingerly right now. He’s still throwing lots of volume despite issue. Edgar tries to spin – missees. Munhoz tries the high kick – blocked. The round ends.

Round 4: Edgar gets a takedown at the start of round four. Munhoz again does an amazing job popping straight back up. The Brazilian lands a nice jab. Edgar fires off a four punch combo. A couple of body kicks from Munhoz. Edgar lands a big left hook. ‘The Answer’ follows it up with a big right hand. Edgar misses coming in and eats a big right hand – perhaps the biggest punch of the fight. Again, Edgar comes in lands a couple of small shots but eats another huge shot for his efforts. A couple of shots from Munhoz who is growing into this fourth round. A big shot lands just as the rounds ends.

Round 5: Edgar lands another beautiful upper in the final round – that shot has been money all night for him. Just over a minute in an, all hell breaks loose. Both men are trading shots in the middle of the Octagon. Edgar backs up and lands a huge right to keep his opponent off. Munhoz charges forward with a flurry of punches and kicks but Edgar is able to slide out the way. Munhoz lands another leg kick. Edgar pops out the jab. Followed by another not long after. Both guys land power shots. Munhoz hits another big shot. Edgar lands big and knocks Munhoz back on his heels. Another right by Edgar who then dips out of the way of the counter shot. Munhoz touches the body with a kick. A big right from Munhoz in the final 10 seconds. He spins and misses as the round and fight comes to a close.