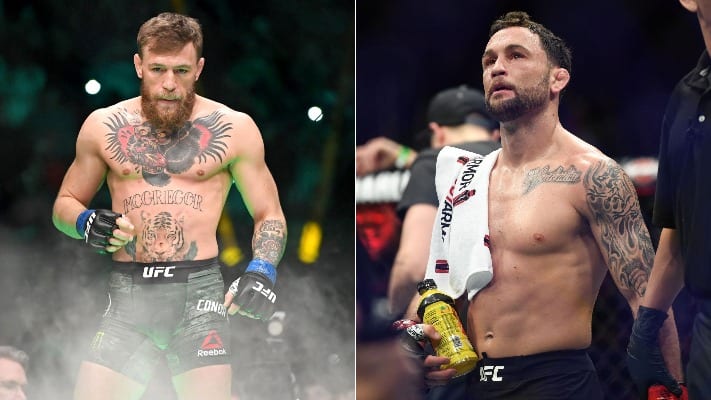 It looks like Conor McGregor and Frankie Edgar have verbally agreed to fight each other later this year. Yesterday, McGregor took the time to wish Edgar a happy birthday, while also claiming he’d be seeing him in December, suggesting a fight between the pair.

Now, Edgar has issued a response, saying he has already agreed to the matchup, it’s simply on UFC president Dana White and McGregor to make it happen.

McGregor responded yet again, calling for White to make the fight, and suggesting he’d donate his fight purse to charity.

This isn’t the first time McGregor has talked about fighting Edgar. Earlier this summer in an interview with ESPN, McGregor discussed the possibility of fighting Edgar as well, who he was never matched up with during his run in the featherweight division.

“And you know who else is top of the list? Frankie Edgar is also up there – right there- on the list. Because he has similarities to Khabib,” McGregor said. “Runs on the back foot, shoots on the single leg. I want these types of similar bouts. And also, Frankie has been very respectful. Frankie has always respectful. He said, ‘I want to tell my his grandkids that I fought Conor McGregor’, one day.

“And for me to hear that – ask Dana [White] – for me when I heard that, now this is me going back many months when I said that – I messaged Dana straight away and said, ‘That’s the fight to make’. Even though he lost the bout to Max [Holloway] in a close bout, I don’t care about that. Wins and losses don’t matter in this game. It’s the stories we are all on and the journeys we are all on.”

What do you think about Edgar and McGregor possibly fighting in December?