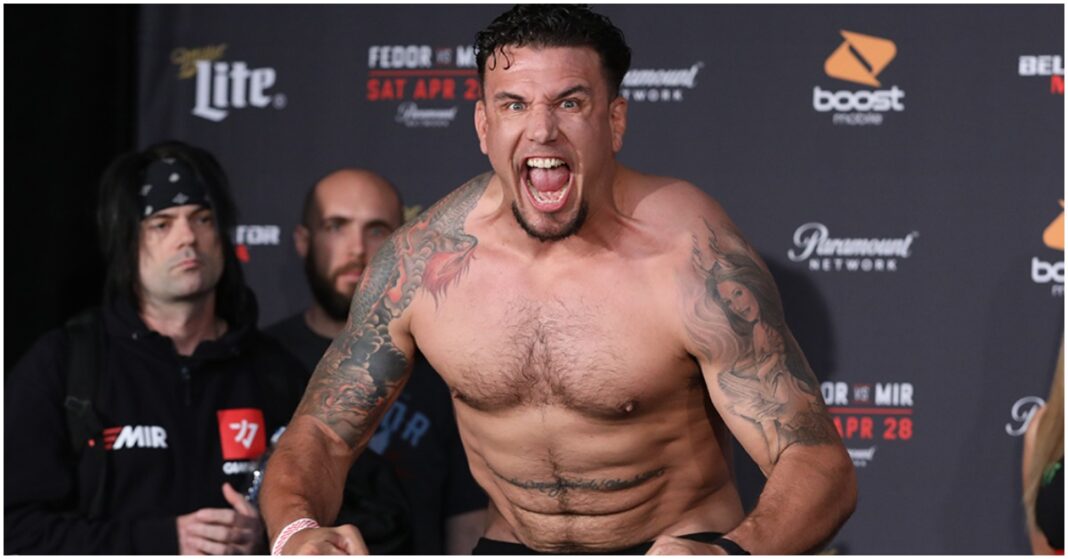 Frank Mir has shocked many by claiming he is in line for a career-high payday when he takes on Kubrat Pulev in the main event of Triller’s Triad Combat show this Saturday night.

During a recent appearance on The MMA Hour, Mir revealed that despite being involved in some of the biggest events in UFC history he has never netted a million-dollar paycheque.

“The second Brock [Lesnar] fight [at UFC 100] was close, but that was the second-biggest of my career. But no, this one [is the biggest],” Mir revealed. “In fact, if I hit my bonuses and I win, I’m basically touching on seven figures, and I’ve never been within a couple $100,000 of that in the MMA world.”

After seeing the money Tyson Fury and Deontay Wilder recently made for their trilogy fight, Mir is kind of miffed that he and Lesnar didn’t come anywhere near to those figure despite outselling the heavyweight boxing duo,

“I think that’s a testament to what Triller is doing, pushing the paydays and sharing the income,” Mir said. “I mean, here, I realized this a couple years ago, this is kind of bittersweet for me — I looked at the amount of pay-per-view buys that Deontay Wilder and Tyson Fury sold, and what they took home for paydays. Me and Brock sold more pay-per-views, and I didn’t take nowhere near as much as either one of them. I think Brock and I, combined, didn’t take 10 percent of what they did.”

“I just make it everything but a boxing match,” Mir said. “It’s too close to the fight to really worry about letting the cat out of the bag, but yeah, behind every punch, he’s not going to be able to throw combos. Every punch, I’m grabbing him afterwards, and then I’m going to work the clinch and just drag on him and really push his grappling cardio, which he doesn’t have to the experience that I do. It’s different. You can ask anybody’s who’s fought MMA — the first time you wrestled with somebody, stood up, and then you had to throw punches again? It’s a different feeling, and it takes a lot of acclamation.

“I have 20 years of doing it, and my endurance and my understanding of how it works, being relaxed and able to still fire off. So obviously boxing at range, even if I thought I was better than him at that, why would I? That’s what he’s best at, where he’s most comfortable, where his heart rate is going to be low. I’m going to jump on him and rag-doll the hell out of him.”

Are you surprised to hear Frank Mir is making the biggest money of his career this weekend?