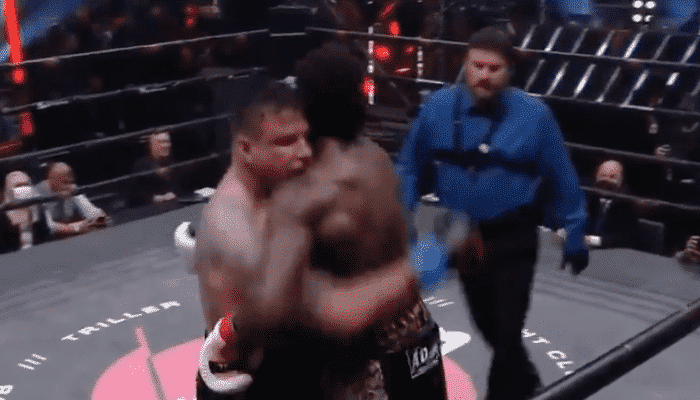 Frank Mir is only looking at the positives.

The former UFC heavyweight champion made his professional boxing debut when he took on Steve Cunningham at the Triller Fight Club event last night in Atlanta, Georgia.

Although he was naturally outclassed and controlled by Cunningham for much of the fight, he did have his moments. And of course, he was never knocked out as he made the full six rounds.

That, in itself, is a victory for the 41-year-old Mir.

“It is a victory,” Mir told MMA Junkie after the fight. “Honestly, my ultimate goal was to get a six-round decision. But if you said knock him out in 30 seconds or get a six-round decision where you boxed really well, I preferred that one. It sounds like maybe a defeatist mindset, but I think real martial artists understand it’s about the journey and not the destination. That means more to me and my overall life than catching somebody in 15 seconds.

“… I actually feel pretty good about it. I felt that honestly, I won the first two or three rounds. … In my mind, if I know I can hang with a boxer for two or three rounds and win those rounds. Had that been an MMA fight, then I win the fight. That would carry over to my MMA career. That’s really what I am, is a mixed martial artist. It’s (about) looking to always push myself.”

As for the future, Mir wants to compete against Cunningham again whether it’s in boxing, bare knuckle or in mixed martial arts. But after he gets some pointers from him first, that is.

“If Steve would’ve taken me up on (bare-knuckle), yeah, absolutely,” Mir added. “Before, I’m going to actually see if I can pick his brain and seek out what mistakes I made so he can make me a better fighter if he’s willing to do that.

“I think I was asked if we wanted to do an MMA fight. Obviously, I said yes to that. But I don’t think he would say yes to that.”

What do you think is next for Mir?