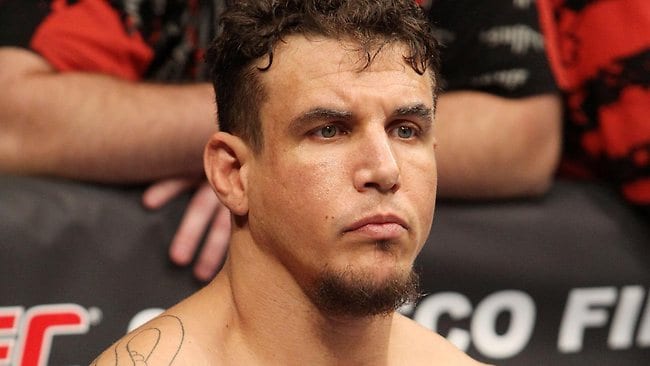 It certainly wasn’t easy to watch Frank Mir break Antonio Rodrigo Nogueira’s arm, but such is the sport of MMA I suppose….

Former UFC heavyweight champion Frank Mir has a long and storied history in the promotion that he was once the poster boy for. Now 35 and likely close to retirement, Mir has fallen on hard times lately; four straight losses have seen the Jackson’s MMA fighter winless since 2011, when he snapped Antonio Rodrigo Nogueira’s arm at UFC 140.

The momentus victory over “Big Nog” was the second for Mir, as he had scored a TKO win over the former Pride FC champion back at UFC 92. In somewhat of a reflective mood, Mir spoke to Combate.com about his rivalry with Nogueira, as transcribed by MMAMania:

“”Nogueira and I are very competitive but I have nothing against him outside the octagon. I like him as a person, so, sometimes, it’s hard to the fans understand. However, when we face each other, I always want to win. People think that you always have to talk about your rival. It’s the case with Lesnar because I don’t like him as a person.”

“He has a tremendous career, he’s a legend of our sport, he has a champion’s heart and was the number 1 guy for a period at PRIDE FC. When I arrived at my home, my wife’s friends had recorded the fight and we watched together. I stopped when Nogueira’s arm popped, I couldn’t watch. They asked me why and I answered: ‘I remember differently. He was punching my face at that time. Watching it from my couch isn’t nice.'”

It certainly was hard to watch the finish of that fight, but all the same these risks are inherent in MMA. All respect to Mir for being open about his duo of fights with Nogueira, and it still might be a trilogy yet. Another famous rivalry that Mir has been involved in is his two fights against Brock Lesnar. Mir submitted the WWE superstar at UFC 81, but was TKO’d in the UFC 100 rematch to unify the interim belt that he’d taken from Nogueira. When asked of Lesnar returning, Mir said the following:

“If think that his come back would be good for MMA. He’s still popular, people know who he is and he brings attention. We are tied with one win each. I would enjoy a rubber match. I would like to welcome him back to the UFC.”

Many fans called for Mir’s retirement after his latest losses to Junior dos Santos, Daniel Cormier, Alistair Overeem and Josh Barnett. The two-time champ looked sloppy, although his chin seemed to be a lot better in his last outing against “The Reem”. Would a trilogy match with Brock Lesnar be fun? Sure, but it may take more toll on Mir’s brain than it is worth.

Would you like to see Frank Mir vs Nogueira/Lesnar 3?