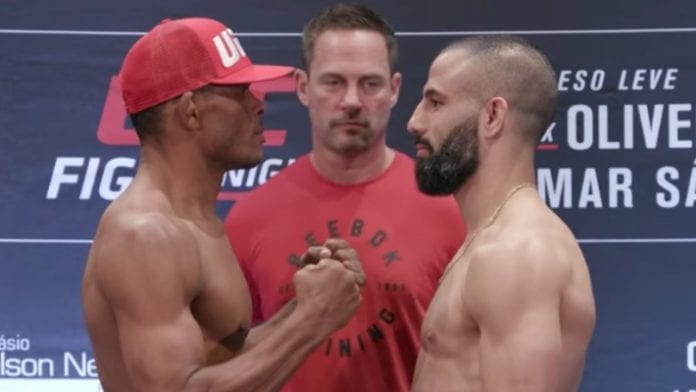 Kicking off the UFC Brasilia main card is a lightweight bout between Francisco Trinaldo and John Makdessi.

Round 1: Trinaldo is the aggressor early on. Makdessi responds with some kicks. But it’s Trinaldo landing the bigger shots. The Brazilian has been advancing throughout the round. Trinaldo misses a spinning wheel kick. Makdessi lands a body kick. Trinaldo is winning most of the exchanges. The round ends as the two fist bump each other.

Round 3: Makdessi misses a high kick. Trinaldo blocks a head kick. This is a much more even round. Makdessi has been more effective defensively. A lot of blocked strikes in this round. Trinaldo misses a flying knee. Trinaldo lands a nice uppercut. Makdessi responds with a kick to the stomach. Trinaldo lands a head kick but not with the desire impact. The two are more aggressive in the last 45 seconds.