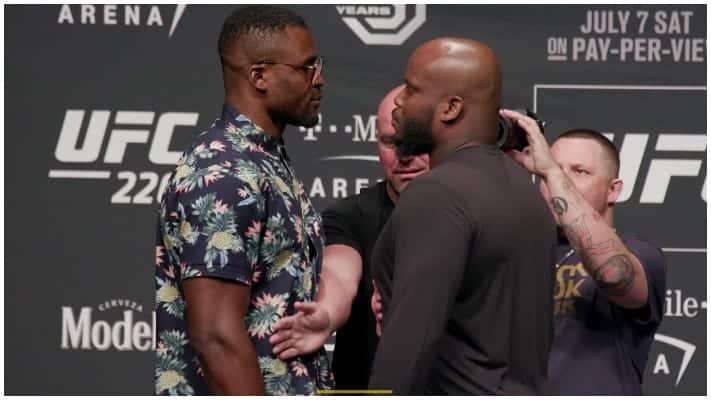 Dana White has revealed his plan is to have Francis Ngannou defend his UFC heavyweight title against Derrick Lewis in Houston this summer.

The UFC president has been talking up a rematch between Ngannou and Lewis for some time now, but the fight is yet to be made official.

In an interview with Kevin Iole of Yahoo Sports, White insisted that despite the fact an official announcement is yet to be made, Lewis is definitely next in line and it’ll be ‘The Black Beast’ fighting Ngannou this summer, not Jon Jones who continues to bulk up for his heavyweight debut.

“Derrick Lewis is getting that fight, White said. “My people were just telling me that Jon Jones came out yesterday and said he’s not fighting until next year.”

Iole later deleved deeper for some more information about the soon to be booked heavyweight title bout.

White revealed his plan is to take the fight to Houston, Texas, this summer after the success of UFC 262.

“We just had a great experience in Houston,” White said. “I’ll probably take that fight back to Houston.”

Lewis is the last man to defeat Ngannou. The pair shared the Octagon in July 2018 in a fight that has become infamously known as one of the worst in MMA history. The UFC boss and fight fans are optimistic that Lewis and Ngannou will deliver a second time round.

Sine then the Cameroonian knockout artist has been on fire, picking up five consecutive stoppage win and a UFC title in the process.

Lewis has been in some fine form of his own winning five of seven fights. ‘The Black Beast’ is currently riding a four-fight win streak which included a spectacular knockout win over Curtis Blaydes last time out.

Do you think Houston is the right host city for Francis Ngannou vs. Derrick Lewis II?