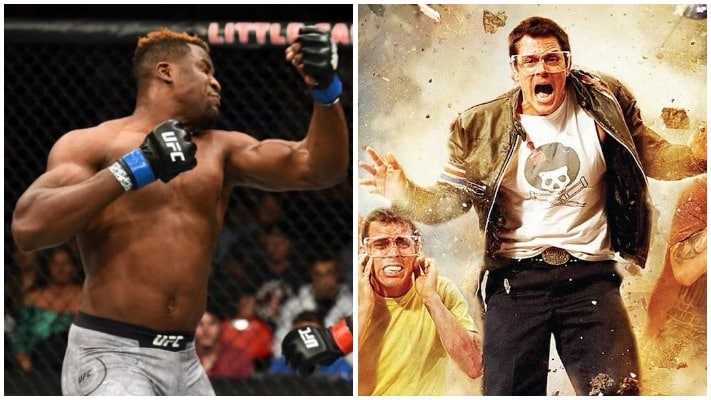 Francis Ngannou is set to star in Jackass 4.

The UFC heavyweight champion has been called upon by Johnny Knoxville, Steve-O, and the gang to feature in one of their famous nut-shot scenes.

During a recent appearance on the Flagrant2 podcast, Ngannou detailed his role in the movie and the crazy experience he had while filming.

“That’s the craziest thing that I’ve ever seen. Man, I had to punch somebody in the nuts,” Ngannou said. “I did it the first time, (and they said) ‘Listen man, we know you. People know that you’re the hardest puncher in the world. It wasn’t hard enough.’ I was like ‘Are you kidding me? Like… I could hurt this guy. Did he at least have kids or something?” (Transcribed by MiddleEasy)

The Cameroonian knockout artist is making a habit of popping up in Hollywood blockbusters. Earlier this year, Ngannou made a cameo in Fast & Furious 9 alongside a whole host of stars.

Ngannou can count himself lucky that acting seems to be keeping him relatively busy. The baddest man on the planet is set for another sit on the sidelines as the UFC has booked an interim heavyweight title fight between Derrick Lewis and Ciryl Gane.

‘The Predator’ was originally supposed to take on Lewis at UFC 265 but was unable to make the date. The UFC refused his request to push the fight back by a month and instead plunged the heavyweight division into a state of uncertainty just three months after Ngannou beat Stipe Miocic to become the champion.

Will you be watching Francis Ngannou in Jackass 4?