LowKickMMA.com
Home UFC News Francis Ngannou Has No Plans Of Re-Signing With The UFC If It... 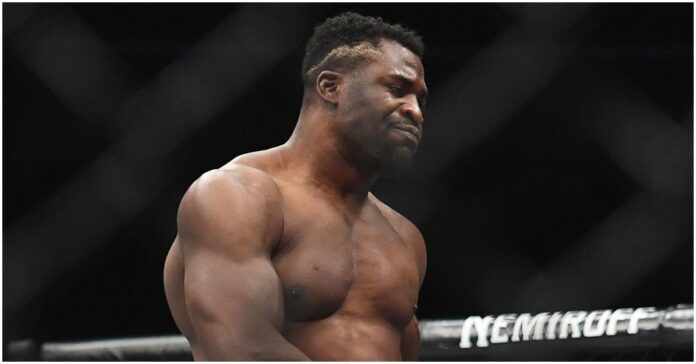 Francis Ngannou will sacrifice a contract with the UFC if it means he cannot box Tyson Fury.

Ngannou and Fury met in the middle of the ring to talk about a potential mega fight between two of the baddest men in the world. Both men are at the end of their respectable contracts and their future is in question. Fury had talked about the possibilities of retiring, as he is an undefeated champion. ‘The Gypsy King’ has already cemented himself as one of and possibly the best heavyweight champion of all time. Many fans would love to see him fight against Ngannou, Oleksandr Usyk, and Anthony Joshua. Wins over all three of those fighters would give him a perfect record and possibly the strongest claim as the heavyweight boxing ‘GOAT’.

Ngannou on the other hand, is in the prime of his career and is coming off his most impressive win of his career over Ciryl Gane. He relied less on his raw power, and showed that he truly is a mixed martial artist by winning with his grappling. He also knocked out the best heavyweight ever, Stipe Miocic with relative ease in the bout before that.

Francis Ngannou is standing from on his claim that he will not be signing a contract with the UFC if they do not allow him to fight Fury int he boxing ring.

Ngannou was on Ariel Helwani‘s ‘The MMA Hour’ when he was talking about his future endeavors in the combat sports world.

Ngannou promised that he would fight after the Fury match and wouldn’t retire. He still would like to fight for the UFC, as he believes he has some unfinished business with fighters such as Jon Jones and a possible trilogy matchup between Miocic.

What would you like to see Ngannou do next?