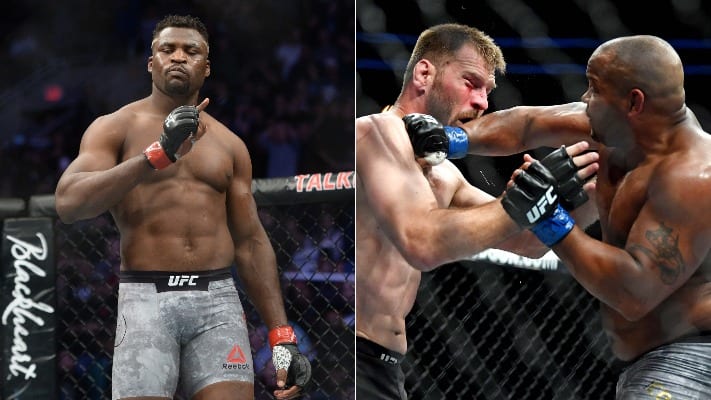 One fighter keeping a close eye on the UFC 241 headliner between Daniel Cormier and Stipe Miocic was Francis Ngannou.

Miocic defeated Cormier via fourth-round TKO to regain the heavyweight title and become a two-time champion. The question now turns to who he should face next. There’s always the option of a trilogy fight with Cormier, especially with the score now tied at 1-1.

There’s also a super fight with Jon Jones as an option. But when it comes to a contender standpoint, a rematch with Ngannou makes the most sense. “The Predator” notably challenged Miocic for the title last year only to lose a lopsided decision.

He would lose once more in a drab decision to Derrick Lewis before reemerging as a top contender with first-round knockout wins over Curtis Blaydes, Cain Velasquez and Junior dos Santos. So what did Ngannou think of the UFC 241 headliner?

“Honestly, I did not expect this fight to be so intense,” Ngannou said on Ariel Helwani’s MMA Show on Monday. “It was such a great fight. They hit each other very well. I think Stipe took over with that body shot he put on DC. That affected DC because DC was doing very well. I mean, maybe he was winning the fight before that. It was a great fight.”

Ngannou did not have anyone in particular that he wanted to win. That’s because in his eyes, he’s deserving of facing whoever the winner turned out to be:

“To be honest, I think I should fight the winner of DC and Stipe with whoever wins the fight,” he added. “With Stipe, I need to fight with him to have my rematch [and] at the same time, a title shot.”

However, there is no indication from the UFC as such that he will be next in line.

“I’m here for the rematch, the title shot,” he concluded. “It would be unfair for them to not give me that fight. I’ve done what’s had to be done to deserve it, to prove that I can get the opportunity back and I think it should be like that.”

Do you want to see Ngannou face Miocic in a rematch next?